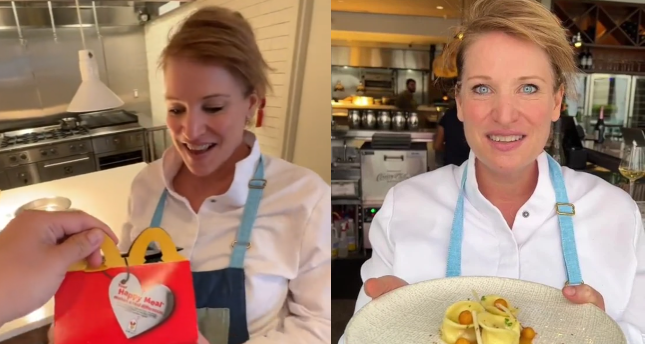 A chef has turned McDonald’s nuggets, fries and apple pies into gourmet pasta

The first thought for most McDonald’s chicken nuggets and fries probably isn’t “How do I get these into fancy tortellini?”, but the chef Amy Brandwein does exactly that after a challenge from the creator of TikTok Danny Kim. Brandwein started with a Happy Meal consisting of nuggets, fries, apple pies and sweet and sour sauce. She then made tortellini, then combined the nuggets and pie filling with parmesan cheese and used it as the tortellini filling, then turned the fries into dauphine potatoes and served with the sweet and sour sauce, slices fresh apples and pie crumbs:

It’s certainly unconventional, but it looks pretty good. However, all that work for three pieces of pasta might seem like overkill. Maybe it could be run on a larger scale, or at least with 20 nuggets instead of four.

Brandwein is the chef and owner of Washington, D.C. restaurants Centroline and piccolina. She earned a nomination for the James Beard Award this year in the Best Chef – Mid-Atlantic category. And she has been a key figure in advocating for greater representation of female leaders, talking to the Resy.com blog about it last month:

“In general, the first years were difficult. Most of the time I was the only woman on the hotline. Women in leadership positions were very rare. The hospitality industry and media culture were certainly not charting a course for female leaders and diversity was not important. I was lucky enough to get a big break early in my career, from someone I worked really hard for – and that propelled me to where I am today. I am an example that is rare and spaced.

“The path for women is quite difficult when you consider the costs of culinary education, planning a family, capital and starting a business. That’s why I chose to talk about it very clearly – to help those who love food and want to have a career.It is still very difficult for women to break into this industry and that is why female representation in kitchens is still very low.

“I’m struck by how few female chefs there are in DC even now. Becoming a chef-owner has been the highlight of my career: being able to create my own vision and identity. Before that, it was generally difficult to be taken seriously, even though the work was essentially the same.

Brandwein is certainly charting an impressive path for herself and others. And this video (which had over 1.3 million views and over 134,000 likes from monday morning) will definitely draw more attention to her and her work.