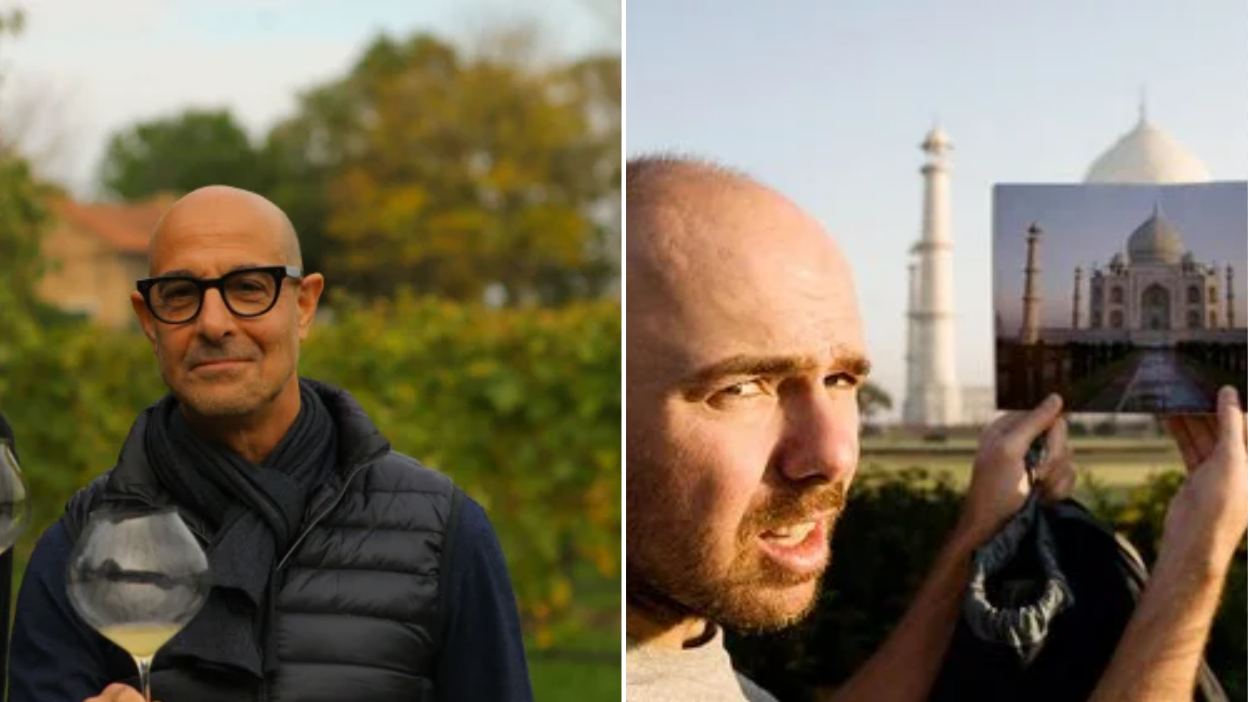 A definitive ranking of celebrity travelogues on TV

Turn on the TV. Keep on going. You don’t have to tell me what the show is, it’s a celebrity travelogue, right? You can’t watch TV right now without encountering one of these shows. You know the ones: A famous, familiar type of name — usually a funny professional name, sometimes accompanied by a random family member, whether it’s their child or their mother-in-law — ends up transplanted to a distant location, for the purpose of entertaining us.

They smile at the camera while trying a local delicacy, and when they’ve eaten it, they roll their eyes to express how delicious it is. They are accompanied by upbeat music that suggests their incompetence at fishing out of the water as they inevitably board some boat of some sort. They always walk, always on a market.

Such is the formula of these shows, ubiquitous for ten years. Do we like them? Yeah, I guess, when they good like Stanley Tucci: In Search of Italy Where Cruise with Jane McDonald. Do the networks care anyway? No: they’re relatively cheap to craft with just about any talent that wants them, so we get them whether we like it or not.

They tend to be run mostly by white men, which is a testament to the current state of comedy in the UK (indeed, comedian London Hughes talked a few years ago about her convincing none other than Whoopi Goldberg to do a travel show alongside her, but incredibly, no UK channel wanted it). Tone-wise, they fall somewhere between a very light documentary and a mobile stand-up routine.

Obviously, there are a few exceptions — not all celebrity travelogues are animated by comic books, for example — but in general these shows have almost become a genre of their own, which means I’ve done The Noble Thing: I’ve put together an official but-ranking based on the major celebrity travelogues that have aired on British TV over the past ten years.

Shows must be British (Zac Efron: down to earth, I’m so sorry), and they must have been made at some point in the last decade. The five major networks will dominate, with notable exceptions. Where a specific celebrity has made more than one stand-alone program or series about travel to a particular location, those shows will be grouped together under the celebrity’s name and the rated output as a whole, again because I’m only ‘a human. Also, as a caveat, we almost certainly missed some, but we think these are the greatest hits.

17) All those of Jack Whitehall

Unfortunately, I can’t feel medically entertained by such a classy voice. Next!

Walsh falls into the “go where the water doesn’t go” celebrity category, which immediately puts me off when it comes to these shows. I want my traveling celebrities to do it for love, not because they’re desperate and crave a vacation. In general, although Walsh is quite affable (my nan likes him on The hunt), unfortunately, a concise name doesn’t make a great celebrity travelogue. Sorry Bradley.

My toxic trait is that I love these shows, which send the unholy trinity of Gino D’Acampo, Gordon Ramsay and Fred Sirieux to various locations and encouraging them to travel by jet ski whenever possible, under the vague pretense of making a travel diary centered on food and wine. But I can’t in good conscience call the series these men do together in any way “good” – they’re more just the term “caveman” made sensible, as they guffaw while doing cook various meats over charcoal and push each other through bodies of water. The audience is probably just me and your dad, who thinks it’s “epic”.

It was an early iteration of “just three guys laughing!” version of the travel diary. It took place between 2006 and 2011 and featured Dara O’Briain, Griff Rhys Jones and Rory McGrath, often in a canoe. The simplicity worked well and it helped that the chat was really quite funny, but it got somewhat lost in time.

Tarrant on a train that looks relatively worried will still be a decent value. Also, if that’s not the most “Channel 5” program title you’ve ever heard, I’ll give you a ten.

The premise here is that Jon Richardson accompanies his stepmother Gill Adams to Spain, where she plans to retire, otherwise she threatens to move in with him and his wife. I think you have to be by the way with Richardson’s Extended Universe somewhat takes away from what’s meant to be a casual, laid-back watch, but at the same time, it gives the show a little something different.

Jones is a great host, Olivia Colman is a great storyteller, and Channel 4 star guests like Lady Leshurr and Scarlett Moffat do the everyday things that make up a British holiday – eating fish and chips, milking goats, the usual – make this one a sweet look.

Good-natured comedian John Bishop has hosted a few travelogues in his day (John Bishop’s Australia in 2014; John Bishop’s Ireland more recently in 2019) and the twist on the format here is generally that he combines the general “hit in new country” with clips from the stand-up tour he’s here to do. These are good things that go down as well as a good pint of Guinness or the fur of a koala.

Actress Joanna “Sweetheart” Lumley is a big of the travelogue genre, who, along with Michael Palin, was kind of doing it before it was cool. I would watch her read the phone book to be honest, but seeing her hang out, charming people in destinations ranging from Greece to Japan, is so much better.

Originally hosted by Timothy West and Prunella Scales, it was taken over in 2020 by Gyles Brandreth and, wonderfully, Sheila Hancock. Ideal for those who really love canals (as a native of Birmingham, “more canals than Venice” is a common phrase in my vernacular) and hungover.

Not sure Steve Coogan and Rob Brydon rowing over scotch eggs with runny yolks necessarily counts as a travelogue, but on a good episode, it’s pretty much the funnest thing on this list, so I’m hitting my hammer.

Basically the beautiful version of The trip; again I’m not sure this qualifies strictly but I wanted to mention it because there really is nothing better or more calming in the world than listening to dads chatting while enjoying the countryside and trying to catch a big bloody fish.

5) Stanley Tucci: In Search of Italy

A lyrical love letter to pasta brought to life by one of the most charming specimens on the planet. You know that the Tucc ranks in the top five.

travel man, which visits a different European city each episode, offering a potential itinerary for a two-day break, is always great fun, whether you’re watching episodes hosted by Richard Ayoade or Joe Lycett (actually changing hosts and still having a new guest keeps the show fresh). I still enjoy those city breaks hiking like a bit of head-massage TV, sandwiched between episodes of come dine with me and Travel by coach a Sunday.

Michael Palin does more than crack the top three, with his soothing, long-running show about train travel across the UK. Chris Tarrant: Extreme Railways attempted to improve on the formula, but I’d say you don’t need anything more when you have Palin’s suave tones talking to you through the beautiful countryside lashing out the window.

National treasure Jane McDonald knows she’s as camp as Christmas, and her travelogue, all about “cruising” (the double meaning a particular hoot for her large gay fanbase) is her trademark in its own right. McDonald, a former cruise ship host herself, is an engaging and warm host, and the show is a real delight as McDonald visits destinations from Vietnam to the southern United States. I bet the reason why Cruise is both a cult classic and a BAFTA winner, that’s because it’s fun and above all quite unique, honoring a mode of travel decried by some and absolutely adored by others (the latter camps are right).

Argue as much as you want. Sublimely funny and downright silly, for me, top spot could only go to the show that gave us Karl Pilkington watching a hippo walk into his living room with his mouth open and just saying, “That’s mental.”

2022-11-08
Previous Post: What voters need to know on Election Day – Iowa State Daily
Next Post: Stanley Tucci shares his signature pasta recipe with all the ingredients to taste Italy at home