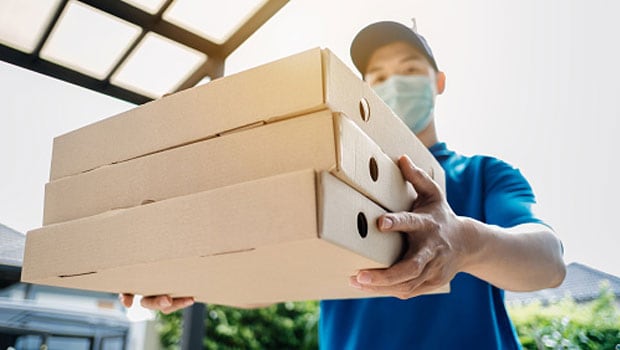 A pizza delivery man shouts in front of the customers’ house; Reason will leave you wide apart

The internet is full of funny posts, and we just can’t get enough of them. We spend hours on our phones and laptops browsing social media. As we are always hooked on various platforms, we are bound to find something that will tickle our funny bones. Recently, one of these humorous videos caught the attention of many and went viral on social media. This time you can see a pizza delivery guy screaming outside a customer’s house. However, there is a reason for this! The customer asked the pizzeria to shout “Shannon, your pizza is here”. They also asked the pizzeria not to ring the doorbell or knock on the door because it would disturb their grandmother’s sleep.

At the start of the video, you can see the delivery man approaching the customer’s door. And he immediately begins to shout according to the instructions. When the customer opens the door, she thanks him and takes the pizza. This video was originally shared by Instagram user @avabreauxx and was later shared by @memezar. Since this video was uploaded, it has been viewed 3.9 million times, has nearly a thousand comments and 236,000 likes. Watch the video here:

Many people also commented on the post. One person said, “He jumped six levels of screaming. I bet he’s been doing this for a few months. Another person said: “The door opened in the middle of a scream, but my guy was engaged. He was going to get his point across, even if it was directly in front of poor Shannon. No way grandma is sleeping during this.” Some users also said, “You need to tip this man a big tip” and “Best video I’ve seen in a while. This guy deserves a raise.”

Some users also hilariously said that they would try to give such instructions to the pizzeria next time and see if they actually did. One user wrote, “Wow, so much fun; I want to do this too.”

What do you think of this video? Let us know in the comments below!