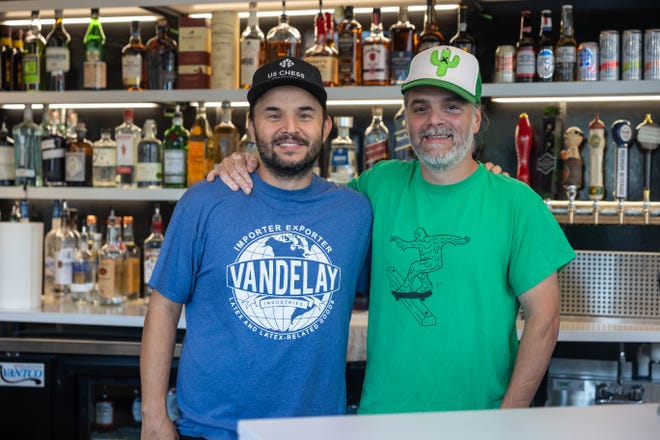 Bar Lucci opens in Kent; plans for the pizza in progress

After years of planning, Bar Lucci has finally opened on North Water Street. Kent’s last watering hole opened for the first time on July 8 to a thirsty crowd.

“It’s been pretty good so far,” co-owner Jon Finley said. “It was a busy opening weekend and not every day was a waste.”

“We signed the lease over two years ago here,” Jon said. His brother and co-owner, Peter, said the original idea was a barcade, a place where people could go and play arcade games and drink.

Between the city’s apprehension of the barcade business model and the initial cost, the brothers went back to the drawing board, resulting in the current iteration of Bar Lucci.

It’s obvious, Peter said, from customer reactions on social media that their customers are enjoying the vibe. Their crowds prove it too.

“Yesterday was probably one of the busiest Wednesdays we’ve had in a long time, and there are no students here,” Peter said Thursday. “People in this town love mom and pop stores. They always seem to come out and support the local guy.”

Making people – employees and customers – feel comfortable in their establishments is essential to these fraternal owners.

Creating a welcoming environment for their workers means using a horizontal approach to management instead of a traditional top-down model, choosing to rely on the expertise of their staff, bartenders Scotty Ward (a Venice veteran and of the Water Street Tavern) and Stephanie Pullela.

“We wouldn’t be open without them,” Jon said. “It would be me and [Peter] bartender, and we’d be out of business.”

The relaxed demeanor of their owners also facilitated their opening. When Bar Lucci’s opening was delayed, their landlords gave them a break on rent; Jon called them saints.

Listening to feedback from their customers is how they make the bar more appealing to regular and potential customers. So far, they’ve taken a number of suggestions to heart. Jon is aware of the need for more visible signage, for example. It also serves wine after someone asks for a drink during opening days.

“There are just little things inside the bar itself,” Peter said, “like we need a hook in the women’s toilet.”

Offering a range of drinks, from Pabst Blue Ribbon to Johnnie Walker Blue, broadens their appeal to a more diverse crowd.

“We want to have good stuff,” Jon said, “but not too expensive like in Tremont where they have really good glasses but they’re about $13 or $14.” Ideally, they will serve beers between $4 and $7. Jon said he will work with his suppliers to get the desired variety; Both Jon and Peter said the intention was to have a rotating beer selection.

“But then, on the booze side, Jim Beam is four bucks, Johnnie Walker $25,” Jon said.

A few days after its opening, Bar Lucci still has that smell of a new, freshly painted bar. A black and white triangular shaped canopy hangs above the bar. Speakers and televisions hang from the rafters. The interior feels like standing inside a more traditional MC Escher painting – geometric shapes and simple color schemes.

The state the bar is in is just one step on the way. The brothers have plans, especially for the second floor.

“It will have a different vibe than this place,” Jon said. “It will still be cool, but it won’t look like that.”

The upstairs space will contain a kitchen so they can start serving Lucci’s pizza at the bar. It will also serve as a meeting place for local groups. Jon said they plan to hold shows once a week once the second floor opens, which he hopes to accomplish this year.

They are also finishing work on their terrace which extends from the side of the building to the front. The lights will be installed within the week, and they will be able to put tables and chairs outside at the Scribbles down the street.

In addition, Bar Lucci will host a number of activities planned by the Finleys.

“We are going to set up a euchre tournament next week [Wednesday, July 20]this will be our first event,” Jon said. “I think we can do anything from wine tasting for the elderly to game night and just bring a few PlayStations or something for the younger ones to play.

Owning a bar is new to the Finleys, but they’re learning on the job and working hard to make their new venture a place where everyone can feel welcome.