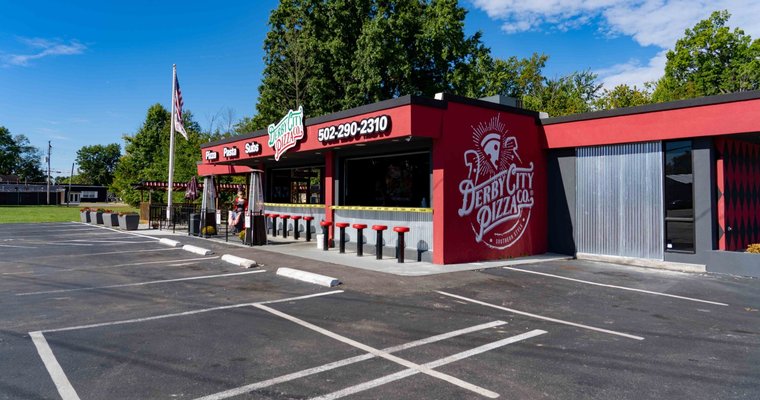 Derby City Pizza Co. Ready to Roll Out of Louisville | 1-on-1 with Pizza LeadershipPizza Marketplace

Derby City Pizza Co. in Louisville, Kentucky, has seven stores and is preparing to open more. Could the franchise be in the future? Owner Larry Davis says maybe, if they can find the right people.

It’s 11 a.m. on a Friday morning and the garage doors at the front of Derby City Pizza Co. are wide open to take advantage of the late September weather. A waiter wipes counters and menus, reading for lunchtime. It’s quiet now, but around 11:30 the tables will start to fill up. It’s a small dining room, with a mix of high and regular tables, and bars lining the open garage doors. The dining room smells of marinara and dough. It is, indeed, a traditional pizzeria in every sense of the word.

Derby City Pizza Co. is the brainchild of Larry Davis. Located in Louisville, Kentucky, its seven pizzerias each reflect the communities in which they are located, making it a favorite hometown for locals.

Davis learned the ropes at an early age, working for another local chain when she was 14. By age 19 he had bought the franchise and by age 25 he had three more stores under his belt. But working as a franchisee for another company didn’t suit the self-made entrepreneur. He wanted his own brand, one he could grow himself, select ingredients, hire local talent, and make people happy with great pizzas, friendly smiles, and efficient operations.

“Franchising just wasn’t for me,” Davis said, sitting at a high table at his Valley Station location in a Louisville suburb. Davis sat down with Pizza Marketplace for an in-depth look at how his pizzerias have thrived in Louisville and what drives them.

He first opened a sports bar in Pleasure Ridge Park, another Louisville suburb, and made pizzas, sandwiches, and lasagna for bar patrons. He wanted to focus more on the food side of his business and rented a building with a rent-to-own option. He moved on and opened his first pizzeria in 2011. His second unit followed close behind near Sandiford Field, Louisville’s airport.

He knew he was ready to quickly open a second store after having done so with the previous franchise he had worked for. He pulled out of that franchise because after paying franchise fees and royalties, he just wasn’t making enough money.

“I was paying my managers more than I was taking,” Davis said, “and that’s what made me decide, ‘hey, that wasn’t for me.'”

With seven stores under its belt (and five openings in the past four years), pizzerias have hit Louisville’s pizza scene with a bang. Each store initially had a different name, and Davis made a rebrand with new menus and a new federally registered name—Derby City Pizza Co.—to form a cohesive brand.

“I felt like everyone knew Derby City with Churchill Downs (home to the Kentucky Derby) and horse racing,” Davis said.

The processes are now the same in all seven units and the kitchens work much the same. There is a plan for the kitchens to maintain consistency across the brand.

There’s plenty of great pizza in Louisville, so what sets Derby City Pizza Co. apart from the competition in town?

“It’s the experience,” Davis said. “There are a lot of pizzerias in town, but I stand out the most in that we are connected to the community. We give back to anyone who comes to ask us. I hardly said no to any of them. them. League, you name it. It’s built into every one of my business models. We make sure that giving back is part of that business plan from day one. We do a lot…and that’s what I know who builds a good business.

Customers come, have a good experience and will come back. Local murals on the wall illustrate the communities in which the pizzerias are located with local colors and tchotchkes. The brand’s motto, “Family Spoken Here,” is indeed indicative of how Davis runs her business. His wife operates another Derby City Pizza Co. restaurant, his brother operates two stores, and his children are also involved in the restaurants. “It’s definitely a family business,” Davis said.

The pizzas are built on a thin crust using conveyor ovens due to the amount of food Derby City Pizza Co. produces. Davis said he used to use a tier oven, but at the volume they do, a tier just couldn’t keep up. Conveyors can also handle lasagna and hot sandwiches.

There’s a tub of spaghetti sauce cooking in the kitchen ready to go for the lunch rush. Spaghetti, meatballs and lasagna are selling well. Restaurants used to sell fried foods, but with the rising cost of oil and supply chain issues, they cut them out during COVID.

Davis prides himself on his health inspection scores, regularly racking up 99-100%. “We like to keep everything organized and clean,” Davis added.

There are LTOs, like Double Down Pepperoni and Taco pizzas, that change frequently to give customers something new to try. “It keeps them coming back,” Davis said.

All pizzas can be made with a thick crust for an additional $1.99 for a small and $2.25 for a large. Gluten-free pizzas are available, as is a low carb crustless pizza and a broccoli and cheese crust pizza.

The menu has been streamlined with staff shortages to make it less hectic for servers and kitchen staff. Derby City Pizza Co. employs 125 people company-wide. “I have good, long-time committed employees,” Davis added. “I don’t just hire managers from the outside just because you say you’re a manager. You have to grow within the company.”

David admits he considered becoming a franchisee, but said he hears dollar signs when potential franchisees call, and that’s not what he wants his business to be. “We already have the things we would pay them for,” Davis said. “Because of my franchise history, I kind of gave up on that experience. It would almost be a turnkey if I did that.

“I’m building them to be more streamlined all around with policies and procedures. We already have the product. … We’re not here all the time, but we’re working on it.”

He is only interested in franchising if a franchisee is involved as an owner/operator, and not just because he has the money.

Davis doesn’t want to lose control of his product and he wants a franchisee always present. Getting the open first is the hardest, he said.

He plans to open at least four more sites and wants his children to be involved.

“We’re relatively new. We’ve been here 11, 12 years and haven’t even done any real marketing,” Davis said. “It’s all word of mouth at this stage. We’ve done a few (radio) adverts but nothing in the mass media, but we’re looking to do that. So I think Derby City Pizza hasn’t won a big following. part of the market here in Louisville again. But we will.

Mandy Wolf Detwiler is Managing Editor of Networld Media Group and Site Editor for PizzaMarketplace.com and QSRweb.com. She has over 20 years of experience in food, people and places.

An award-winning print journalist, Mandy brings over 20 years of experience to Networld Media Group. She has spent nearly two decades covering the pizza industry, from independent pizzerias to multi-unit chains and businesses of all sizes in between. Mandy has been featured on the Food Network and has won numerous awards for her coverage of the restaurant industry. She has an insatiable appetite for learning and can tell you where to find the best slices in the country after spending 15 years traveling and eating pizza for a living.