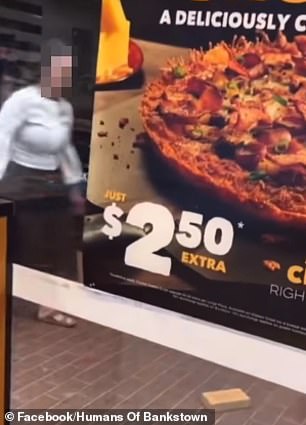 Handheld footage captured the moment a woman in work clothes makes her way into a Domino’s pizzeria with a brick.

Video taken by a customer inside the store in Applecross, south Perth, on Sunday evening showed the smartly dressed woman calmly picking up a brick from the pavement and throwing it through a window.

The woman then used her hand to smash the front door before walking through a pile of broken glass and confronting staff. 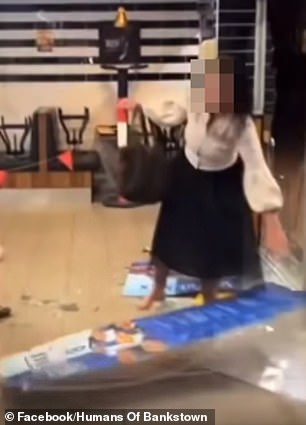 She said to the person behind the counter “give me my fucking phone” as the onlookers looked on in bewilderment.

“Put on shoes,” a worker then said to the woman – who appeared to be wearing sandals and was apparently uninjured despite kicking down the door.

The video ends with the customer filming the confrontation desperately trying to leave the store, while dodging the shards of broken glass.

Footage of the bizarre break-in was shared online alongside the joke caption “she just wanted pizza”.

“She’s probably one of those people who thinks pineapple has no place on pizza,” one commenter wrote.

“Those must be good pizzas,” joked another.

A spokeswoman for Domino’s Australia told Daily Mail Australia that its Applecross store was “the target of an incident of vandalism, which resulted in damage to shop windows”.

‘At Domino’s, the safety of our team members and customers is our number one priority – [we have] offered guidance to team members in attendance,” the spokeswoman said.

“In addition, Domino’s has a number of security measures in place to ensure the safety of our team members, including the use of Mag Locks to secure doors in the evening.

“Abuse, whether physical or verbal, will not be tolerated and the company will continue to work closely with local law enforcement in this regard.”

In November, a young ‘eshay’ was filmed shouting abuse at a McDonald’s employee before smashing the plexiglass separating him from the cash register.

Footage shared on TikTok showed the man shouting at the cashier as his two friends stood next to him at the Sydney outlet on Halloween.

Then, in a fit of distance, he knocks the glass around the cashier before his scantily clad partner drags him out of the shop.

2022-03-07
Previous Post: ‘Explosion’ of a pizza oven in Wales, 1 injured
Next Post: From her Nonna Kitchen in Italy to Project Pasta in Rhode Island