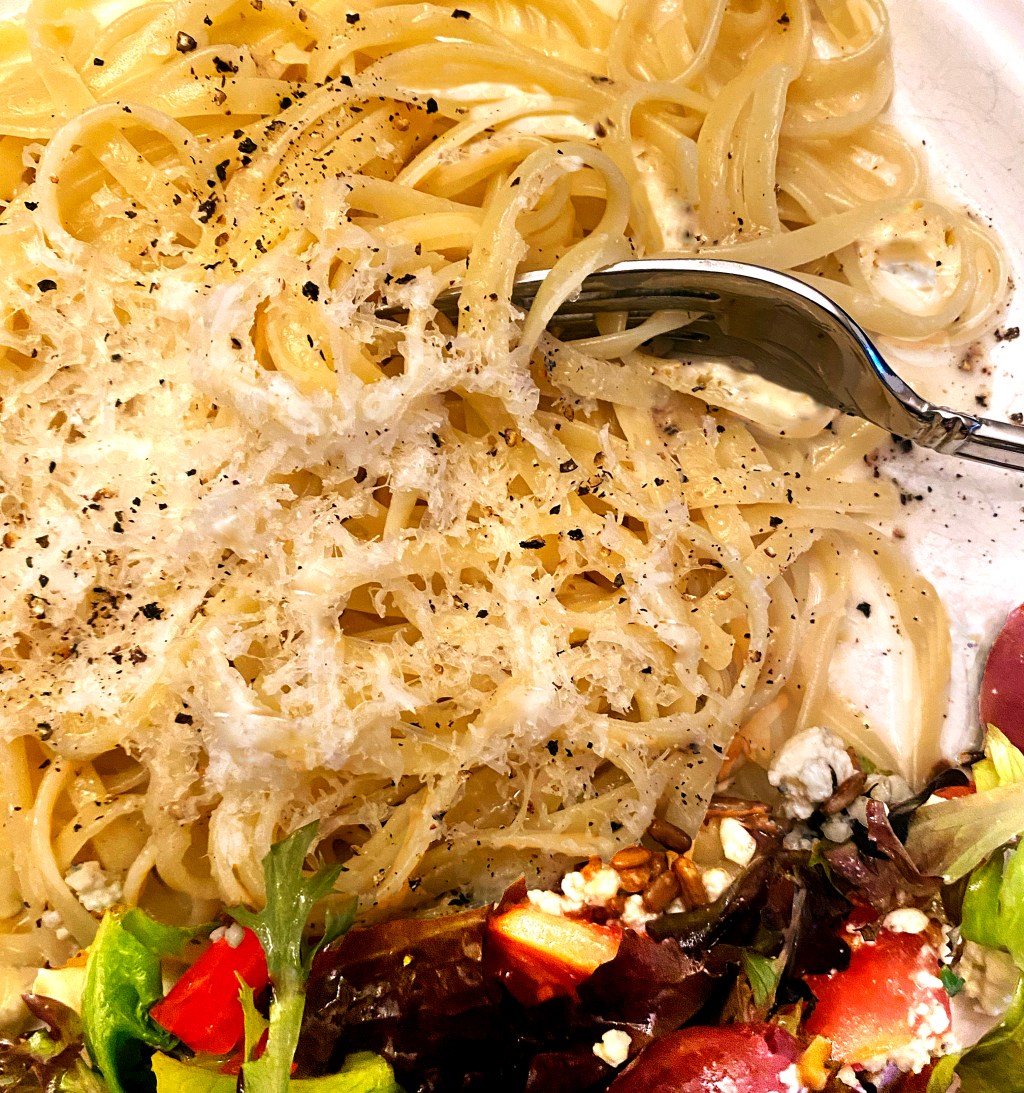 One thing I plan to try in Rome this summer is cacio e pepe. It’s an authentic Roman pasta dish that only requires three ingredients: pasta, cheese and black pepper. Hence the name, cheese and pepper.

How to describe it? Think of it as the Italian version of mac and cheese, but way better. And it probably takes less time to do.

But it’s easy to go wrong if you don’t do it right. The idea is to turn grated pecorino romano cheese into a smooth, creamy sauce that coats the pasta, usually spaghetti or bucatini or some other kind of sturdy “sprig”. Linguine is another option.

The result is a simple sauce with a light texture but full of flavor. Black pepper puts it on top. Done incorrectly, the cheese can clump together and stretch. It will still taste good, but the sauce will be bad. Think lumpy sauce.

Every cook has a “trick” for doing it successfully. A rule of thumb is to use fresh cheese. The thing in a green box is sacrilege, and I wouldn’t even call it cheese. So buy chunks of real cheese, preferably imported from Italy for best results.

Then use a microplane to rake it into a pile of snow. Grating the cheese or grating it into strings is not the way to go with this dish. The microplane makes it nice and fluffy so it melts quickly and evenly.

Then you put it in a small bowl and mix with pasta water to turn it into a paste. Some cooks use cold water. Other cooks add olive oil, while others use a little butter. You can experiment to see which method works best for you. But using pasta water is the authentic method.

The key is to work the water into the cheese a little at a time until it forms a thick paste. Then add to cooked pasta and stir, stir, stir for about a full minute. This incorporates the cheese with the starchy water to make a creamy sauce. This is also why you don’t use delicate pastes like angel hair. It would break with all this commotion.

Once the sauce is creamy and evenly distributed, dress and serve the pasta. This is a dish best eaten right away. So don’t just sit there waiting for everyone to come to the table. If they don’t show up immediately, it’s their loss. I have included the recipe.

When breakfast cereals were invented, they were sold in open barrels. Not very hygienic! But it’s also been promoted as a way to keep your interior running smoothly, so to speak.

John and William Kellogg were pioneers in the industry, although John preferred to sell it as a serious health food, and William was more interested in adding sugar and colored wrappers. Obviously, William’s approach was more successful.

Originally, Kellogg’s cereal was sold in cardboard boxes that were slipped into sealed bags to keep the product fresher than competing brands. But then it seemed more logical to put the bag in the box, as it does today. William also originated the idea of ​​customer loyalty by asking people to hold on to the tops of boxes to redeem for prizes.

And those colorful cartoon mascots? Yeah. Also a Kellogg innovation.

My grandson Áedán describes himself as “an adventurous eater” because he tries almost everything. But I have to admit that I ate kangaroo steak, ostrich breast, horse meat (to be polite to my host), fried cricket, frog legs, reindeer sausage and a few other unusual bites.

In fact, you don’t have to go outside the United States to find weird foods. Like frozen whale skin and blubber in Alaska, steamed burgers in Connecticut, canned pears with mayonnaise and shredded cheese in Georgia, brain sandwich in Indiana, cinnamon with chili in Kansas, nutria in Louisiana (kind of like a fat rat), and Ritz cracker pizza in Missouri.

But wait! There is more! Try soft serve ice cream topped with green chili sauce in New Mexico, plate of trash (a mix of leftovers) in New York, Cheetos ice cream in Oregon, fried squirrel in West Virginia, and pie with pickles in Utah. It is filled with pickles enriched with cinnamon and allspice.

So, what is the most unusual dish you have eaten?

TIP OF THE WEEK

RECIPE OF THE WEEK

Pina Bresciani has a blog that included this recipe for Cacio e Pepe, made the authentic Roman way. She recommends imported Italian pecorino romano for best results. If authentic, the cheese should have a black waxy rind.

1. In a saucepan, bring the water to a boil. Do not fill the pot. Instead, use as little water as necessary to keep the pasta submerged. This will concentrate the starch in the water. Lightly salt the water when it comes to a boil.

2. While the water is heating, finely grate the pecorino into a bowl using a micro-grater. (The Parmesan is too salty for this dish.)

3. Using a mortar and pestle, grind the peppercorns to a fine consistency. Or use a pepper mill. Put aside.

4. Add spaghetti to boiling water. Cook it for half the time indicated on the box. (If it says cook for ten minutes, cook it for five minutes.)

5. While the pasta cooks, heat a stainless steel skillet over medium heat. Add the tablespoon of pepper and grill it, maximum one minute. You should smell the aroma of black pepper, but don’t burn it. Then add a ladleful of cooking water to the pan.

6. While the pasta is cooking, add a small amount of cooking water to the grated pecorino. Using a fork, mix the pasta water until the mixture forms a paste. Add a little more water if necessary. Put it aside.

7. When the pasta is half cooked, remove it from the water with tongs and add it to the pan with the pepper. Move it around with tongs and shake the pan as it finishes cooking. Add a ladle of pasta water as needed to maintain cooking. The goal is to release the starch into the pan. There should be some starchy liquid left in the pan when the pasta is finally cooked al dente. This is what helps form the sauce.

8. When the pasta is al dente, remove the pan from the heat. Wait 30 seconds, then add the pecorino paste to the skillet. Toss quickly with tongs, coating the pasta with the sauce until everything is incorporated. A creamy consistency should form between the pecorino and the starchy liquid in the pan.

9. Plate the pasta. Pour the cream sauce over it. Garnish with fresh pepper and grated cheese if desired.