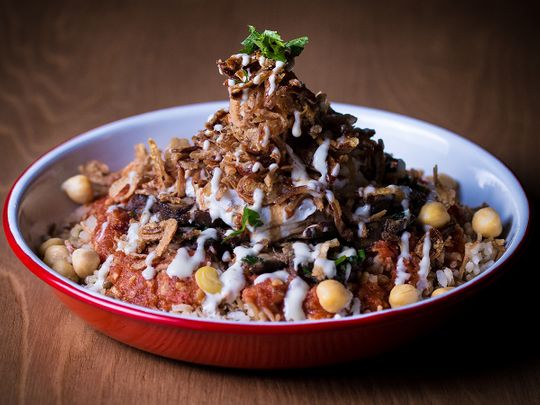 On a busy street in Cairo, Egypt, a customer waits outside a street stall to eat the country’s national dish. It can be a regular at the stand or a tourist who has been waiting all day to try the eye-catching dish for a while now. We’ll never know.

However, we know one thing: each guest travels the world in this dish. Well, maybe not all over the world, but a few scenic countries would do just fine. Egyptian koshari is what we are talking about. Or is it Indian? Maybe, it’s Italian….

Made from a harmonious blend of rice, lentils, chickpeas and pasta, all cooked separately without spices, the dish amazes many. Perhaps the soul of the dish lies in a peppery hot sauce called shatta and a garlicky vinegar called da’ah, which is poured on top with fried onions, bringing a whole new flavor.

The origin of this dish remains something of a mystery.

Koshari is to Egypt what khichdi or khichri is to India. It is apparently a colonial legacy from the British in the 1800s. However, credit cannot go to the British, as they were accompanied by Indian troops who introduced it as khichdi or khichri, a rice-based dish , split yellow lentils, vegetables and spices.

Koshari made the perfect solution on days when there was a shortage of ingredients or time. This is how rice, lentils and chickpeas became the first three layers of the dish.

In the mid-1800s, large groups of Italian workers came to work on the Suez Canal project, and with them came culinary influences, including the addition of tomatoes, onions, and pasta to almost every dish. . Several food historians claim that pasta was in Egypt long before the arrival of the Italians, only then was it called maacarona and mentioned in Arabic manuscripts from medieval times.

Others dismiss this origin story and say Koshari evolved from the traditional Egyptian mujaddara, which is made with rice, pigeon lentils and crispy caramelized onions.

As the debate continued, three more layers were added to the koshari – the pasta, the sauce and the crispy onions or what we call, Birista.

Of course, there is a unique Egyptian twist to the dish. The famous sauce, shatta, made from an Arabic spice mix called Baharat, red chillies, lemon juice, garlic and chilli powder, which bring the dish together. Beware, this sauce is not for the faint of heart.

The beauty of eating a good bowl of Koshari

Although no one can really determine where it came from, many opinions point to the fact that the dish can be eaten well. Some would say nothing tastes better than what you get at home, but a majority would still opt for what they can find at a street food stand.

Not to mention that the koshari served in Cairo is quite different from the koshari served in Alexandria. The first city uses brown lentils and the second uses yellow lentils. Today, the recipe takes several variations where legumes and pasta are swapped, depending on preference. Since it is more of a vegetarian dish, sometimes an egg or two, shredded chicken, cheese, hot sauce or any other ingredient is added that would serve as a delicious finish.

Eat Koshari for breakfast, lunch or dinner, whether you are at home or in a restaurant. By the way, if you want to make it at home, here is a recipe:

By the way, if you want to make it at home, here is a recipe:

Do you have a food topic you would like us to cover? Talk to us at [email protected]

2021-12-20
Previous Post: 9 Ways You Cooked Pasta Wrong and How to Fix It
Next Post: Recipe: Simmer small meatballs, small pasta and greens for a hearty Italian wedding soup