Graffiti Pasta in Denton Square has some big shoes to fill. For 24 years, the former tenant, J&J’s Pizza, was a reliable place to grab a slice of pizza, and the basement below, Ol’ Dirty Basement, was a DIY gig den that became a legendary spot of local music. Last summer, when they announced they were closing due to a rent hike, there was a bit of panic in the square.

Now a new restaurant has opened. Graffiti Pasta, which still has some of the previous tenant’s window art, is a vibrant ode to Denton and pasta. Graffiti covers almost every visible wall, bench and table except for one original stone wall, which is still intact.

We stopped in every night during their first week in business and received a warm welcome and attentive service from Jon Harwell at the bar.

The space has an 80s and 90s pop culture theme.

A-ha’s “Take on Me” caught our eye on two of the large flat-screen TVs above the bar playing a mix of 80s and 90s music videos. There’s also a colorful nod to Back to the Future II displayed behind the bar. Small jars on top of the bar hold silverware, fancy paper napkins, and chopsticks.

The menu is based on recipes from owner Anthony “Tony” Morel’s Sicilian grandmother, with a few modern embellishments. “She taught the family how to cook”, explains Morel between the dressing of the dishes and the passing of the plates to the tables. “I never met her, but I learned the recipes.”

The menu is still expanding and evolving with a few items added and replaced during the first two weeks of service. A butter and herb bread knot, which was not printed on the menu or offered when ordering the first few days, was added later in the week.

We were set to promote Tortellini al Denton, which in the first week was savory cheese tortellini in a creamy pesto sauce topped with freshly cut basil. The following week the tortellini was gone and replaced by pasta al Denton described as spaghetti with fresh spinach in pesto sauce. 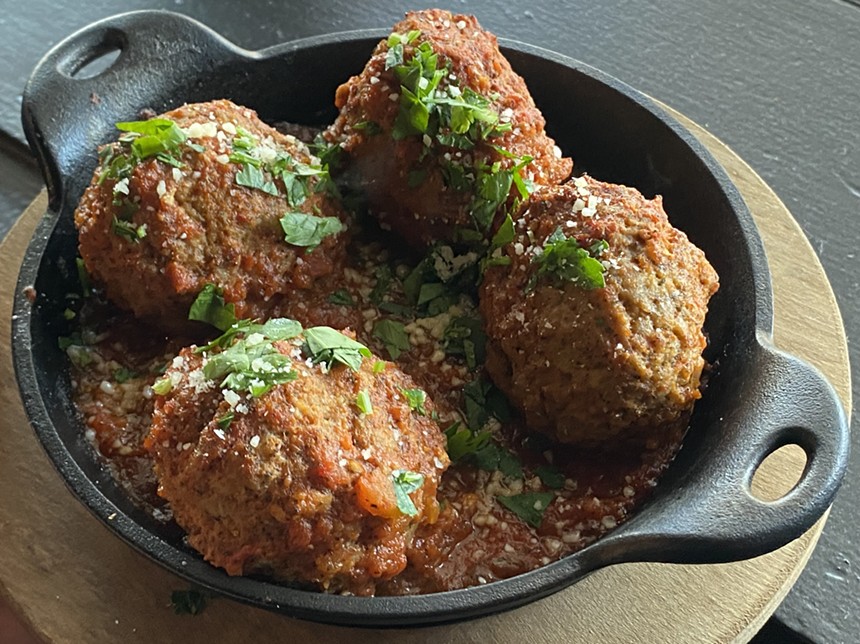 Graffiti meatballs arrived from the kitchen, steaming through a homemade marinara.

“It’s delicious, and I’m not a big meatball eater,” Kathy Brown, a customer sitting at the bar during one of our visits, said of Graffiti Meatballs and Baked Ziti from Banksy. Brown runs a cafeteria and is “hard to please,” but she planned to return soon for another meal. In fact, we spotted her on a Thursday round trip. 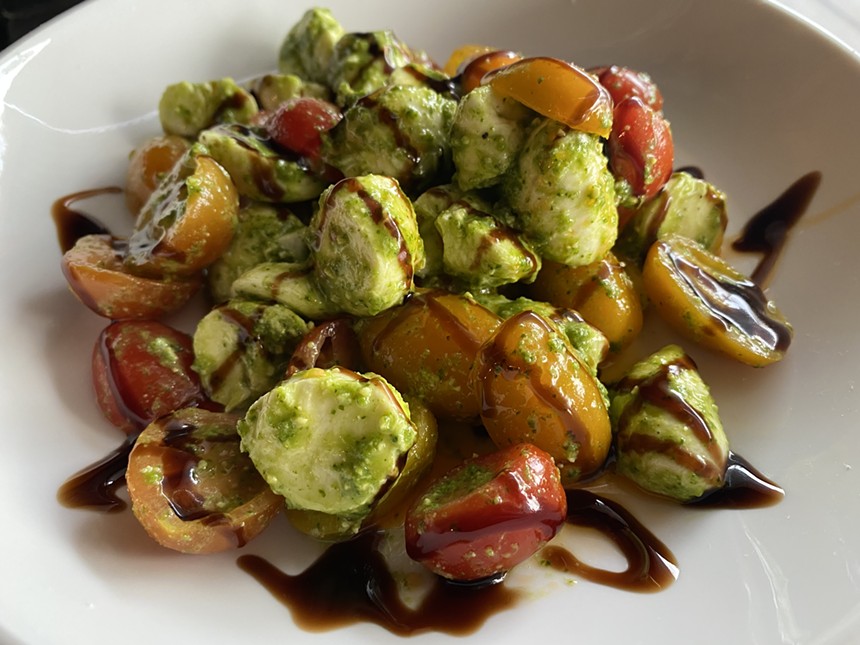 A standout dish was the Calabrese Caprese with heirloom cherry tomatoes, smoked mozzarella balls, Calabrian chili oil, freshly cut basil and homemade pesto with a drizzle of balsamic reduction. Pesto and chili oil combine for a fiery burst of flavor that will have you craving for another bowl.

We also recommend the Sideways Mac Attack, which is made with cavatappi (corkscrew) noodles smothered in homemade Italian cheese sauce and topped with a blend of cheeses and herb panko topping. This might be our new favorite mac and cheese in town.

Graffiti Pasta offers a dozen canned and bottled beers, including the unmissable Italian Peroni. The wine list includes a brut, prosecco, a few whites and reds, all sold by the glass ($5-11) or bottle ($20-50). Harwell boasts a classic “gnarled” Negroni and Black Walnut Manhattan.

As for the musical scene below, it is in progress. The first concert is scheduled for May 7, according to Don D’Amico, who is handling the booking. Their online calendar has more details.

the website notes that at this time they are only open for dinner service, but expect normal opening hours to be 10am-2am, with the kitchen closing at 10pm; the bar will serve drinks until 2am. Check them out Facebook page for updates before you go.