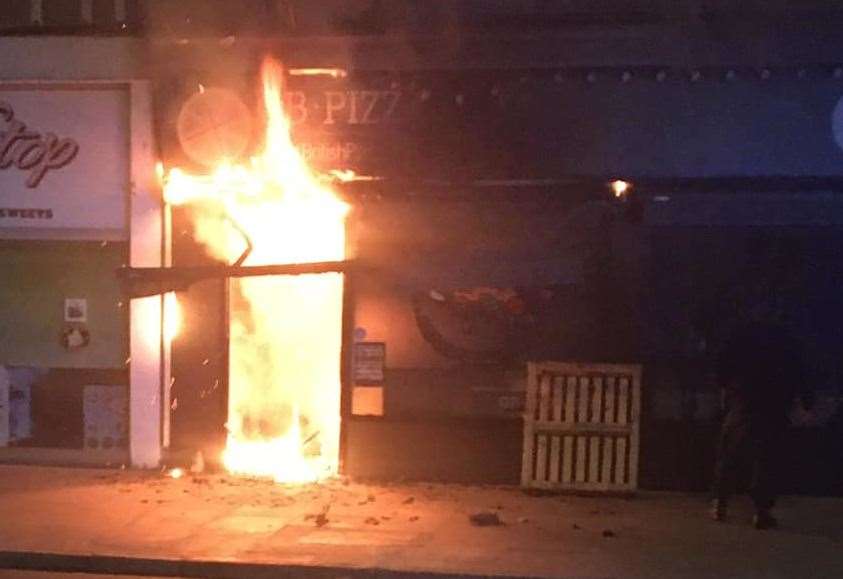 The distraught owners of a popular pizzeria that was ravaged by fire have thanked the community for stepping up in times of need.

The fire broke out at GB Pizza Co in Margate – which had not been refurbished for a long time before its 10th anniversary – in the early hours of yesterday.

A man was arrested and has since been charged with arson for not knowing his life was in danger.

Since the fire, the owners say they have been “beautifully inundated with messages of love and support” from loyal customers, who have flocked to the Marine Drive shop to help with the cleanup operation.

Sharing their devastation on Twitter, GB Pizza Co said: ‘How is it possible to be heartbroken and yet at the same time have a full heart?

The much-loved pizzeria was co-founded by award-winning chef Rachel Seed, who sadly passed away in 2018, and food journalist Lisa Richards.

They first arrived in Margate in 2012, starting in the harbor arm before moving to their permanent restaurant by the sea.

The business has since become an important part of the Margate community, and regulars were quick to spring into action to help staff after hearing about the fire.

“Our neighbors offered us shelter, their toilets, drinks and food. Cups of tea arrived, and like magic hugs were bestowed with wonderful abandon.”

The fire was reportedly started deliberately, but luckily no one was injured.

They also thanked the rescuers who quickly went to the scene.

“The police and fire department were damn brilliant, supportive and kind and even made us laugh on the worst days,” they said.

Unfortunately, a minority of reviewers weren’t as helpful.

“We will ignore idiots who made stupid comments about the cause of the fire,” continued GB Pizza Co.

“It’s very sad that people jump to irrational conclusions before thinking about the human impact of a tragedy. Go control yourself.”

They said the site suffered significant damage in the fire, requiring a “herculean amount of work”, but added: “I hope the insurance company is as helpful and supportive as you are.”

“Thank you, Margate, for showing us your love on such a dark day.”

Finishing the post, they reassured their customers, “We’ll be back. With big old bells on.”

Police and three fire engines were called just after 4 a.m., and crews spent nearly four hours at the scene tackling the flames with a hose reel.

Witness Sam Castle called 999 after seeing the flames on his way home from work.

The 24-year-old said: “I was driving by after work and the building was already on fire so I quickly stopped my car to call 999.

“When I arrived at 4:04 a.m. there was a homeless man trying to put it out but the phone company told me to move them away from the building and they had two fire engines on the way.

“The phone operator asked questions like ‘are there any apartments above?’, ‘is anyone inside?’ and generally trying to piece together information on how it might have started.

“I would say about three minutes after I made the call, about three police cars showed up and started blocking the road, knocking on nearby doors to see if they were occupied to potentially evacuate anyone nearby.

“Then about two minutes after the police arrived the first fire engine arrived and within seconds of the vehicle stopping they had already got their temperature cameras out so they could focus on the parts of the fire that burned the most.

“Overall I think the police and fire department did an amazing job with their response times and the way they handled the incident, so a big shout out to them.”

A fire department spokesman said: ‘No injuries have been reported and the cause is being investigated.

Andrew Miller, 48, of Eaton Road, Margate, was arrested in connection with the fire and later charged with one count of arson for not knowing if life was in danger.

He has been remanded to appear at Folkestone Magistrates’ Court today.

The fire was one of the three biggest in Thanet yesterday.

Hours later, crews were called back when the abandoned Chilton Tavern pub in Ramsgate caught fire.

There was also a major fire at a play park behind Ramsgate fire station.