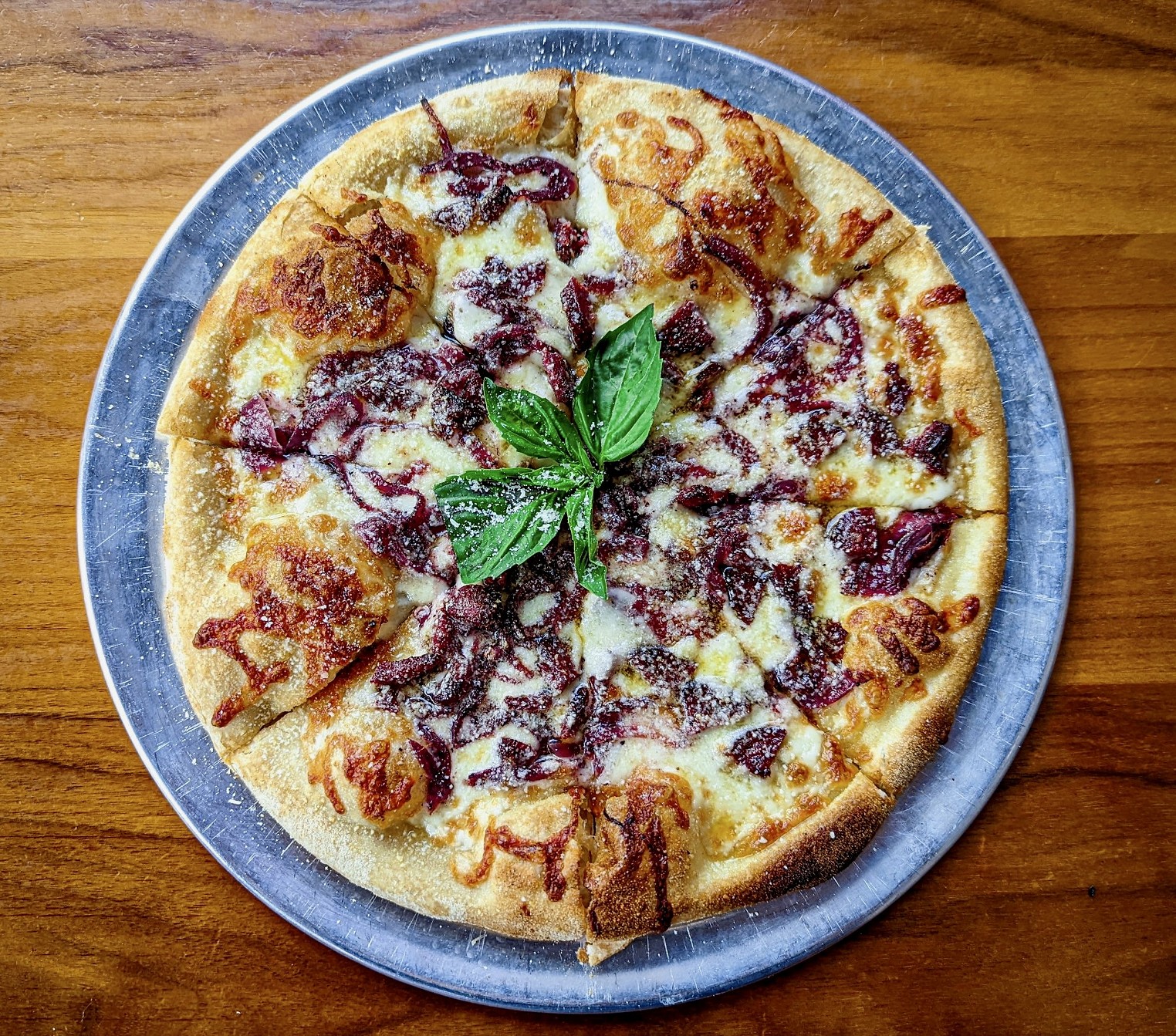 But the pop-up, which Alhoch created in March, a month before taking shape at Bitter & Twisted, ended its residency in September. Now it’s onto its next iteration, this time inside a cloud kitchen in downtown Phoenix’s Melrose district.

Alhoch is known for his noodles through Saint Pasta, his favorite food truck which operated at the Pemberton PHX until he recently went on hiatus. But at Gemini, it’s all about pies.

The pies recall Alhoch’s roots on the East Coast, where as a child he skateboarded to one of three pizzerias in Prospect Park, a small suburb of Paterson City, New Jersey, to grab a slice and meet his friends.

“We didn’t have cellphones back then. So if I wanted to catch up with my friends, I had to skateboard from one pizzeria to another,” says Alhoch.

The company owner, who is known as much for his brash style on social media as he is for his vodka-sauced rigatoni pasta, is ready for the next chapter in the Gemini Pizza story.

“The Bitter & Twisted pop-up was a good incubator, I just wanted to take it in a different direction and needed my own space to do that,” says Alhoch.

Before moving to Phoenix from New Jersey or opening the now infamous Saint Pasta, Alhoch had plans for a pizza place in Jersey City. But when those plans fell through at the last minute on a trip to Arizona to see his then girlfriend and now wife, he decided to move to the desert instead.

Alhoch has long known a restaurant could be in his future, he says. His grandfather owned several popular restaurants in Syria. Growing up, while his siblings played outside, he climbed on a stool to help his mother in the kitchen. Alhoch performed small tasks like crushing garlic for toum, a Middle Eastern garlic sauce with a serious kick, and picking parsley for tabbouleh. In high school, he drafted business plans for various restaurants, dreaming of his future in the culinary field.

“I thought about opening a restaurant for years. But everyone told me that it was not practical, that it would be so difficult to succeed,” says Alhoch. “In Middle Eastern culture, you have to be a doctor, lawyer or engineer, so I ended up getting into restaurant marketing.”

Alhoch learned the business side of restaurants while working as a partner manager for DoorDash. This only reinforced the desire to open his own spot. Without the traditional path to culinary school, he opened Saint Pasta in early 2019 from a parked food truck in Tempe.

“My two best friends from New Jersey were both chefs, so I cooked with them, asked questions, and read books. I was able to learn quite a bit here and there. But I only really started to learn that when I started Saint Pasta and I were in the kitchen 80 hours a week,” Alhoch said.

The pasta truck eventually moved to the Pemberton PHX, where it routinely ran out of menu items and attracted enough customers to cause two-hour waits. On Instagram, the small Italian restaurant has taken on a personality of its own. But Alhoch doesn’t take social media too seriously, he says.

“I think everyone in Phoenix thinks I’m an asshole,” he laughs. “But I’m actually really nice and cool.”‘

As he prepared noodle dishes in a three-by-five-foot space in the truck, Alhoch kept the pizzeria in mind, even though New Jersey would no longer be the backdrop.

Gemini Pizza is about to join the Highland Food Hub.

At the Highland Food Hub, customers won’t be able to see how the magic is made from a two-tier pizza oven inside Kitchen 8, but in late October they’ll be able to either grab their pizza from a window at inside the or order it through delivery services like GrubHub and DoorDash.

It’s the next chapter in Alhoch’s winding journey from curious kid to assertive pasta maker, and now inventive pizza maker. And if he taught us anything, it’s to expect the unexpected.

“I’m not here to do what other people do. I’m Arab-American, but outside the house I always ate Italian food. That will definitely be reflected at Gemini Pizza. And who knows?” asks Alhoch, who already plans to open more Gemini Pizza locations. “I think it might be bigger than Saint Pasta.”

Opening scheduled for the end of October