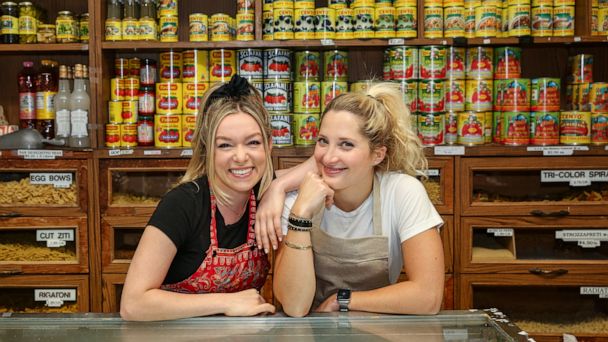 There’s nothing quite like a steamy bowl of handmade pasta and good company – and now two New York food entrepreneurs have elevated the experience through their shared passion for putting heritage into a plate.

Emily Fedner and Sarah Raffetto, the collaborative duo behind Petite Pasta Joint, recognized there was no shortage of awesome culinary competition for Italian-American dishes in the city that never sleeps, so they created a series pop-up dinner parties to differentiate their food while preparing a creative communal table for diners to experience the cuisine inspired by their immigrant families. 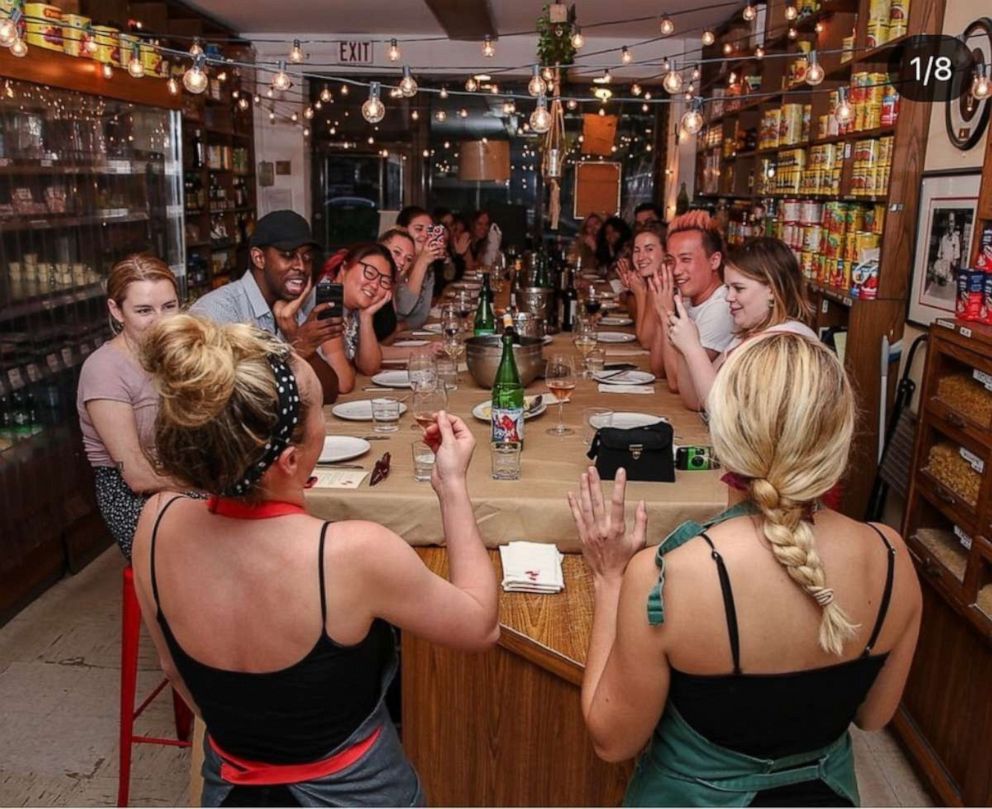 A table of diners inside Raffetto’s pasta shop in New York.

The couple gave ‘Good Morning America’ a glimpse of Raffetto’s pasta shop, which doubles as a dining room for hungry guests, at least those lucky enough to get a spot on the list. waiting.

“Raffetto’s Pasta has been here in Greenwich Village since 1906. My great grandfather very fortunately bought the building in 1920 which is a huge reason we were able to transcend a century and still be here with modest prices today,” said Raffetto, a “4th generation member of the Raffetto fresh pasta dynasty” according to his Petite Pasta Joint biography. “We come from Genoa where pesto is most famous.” 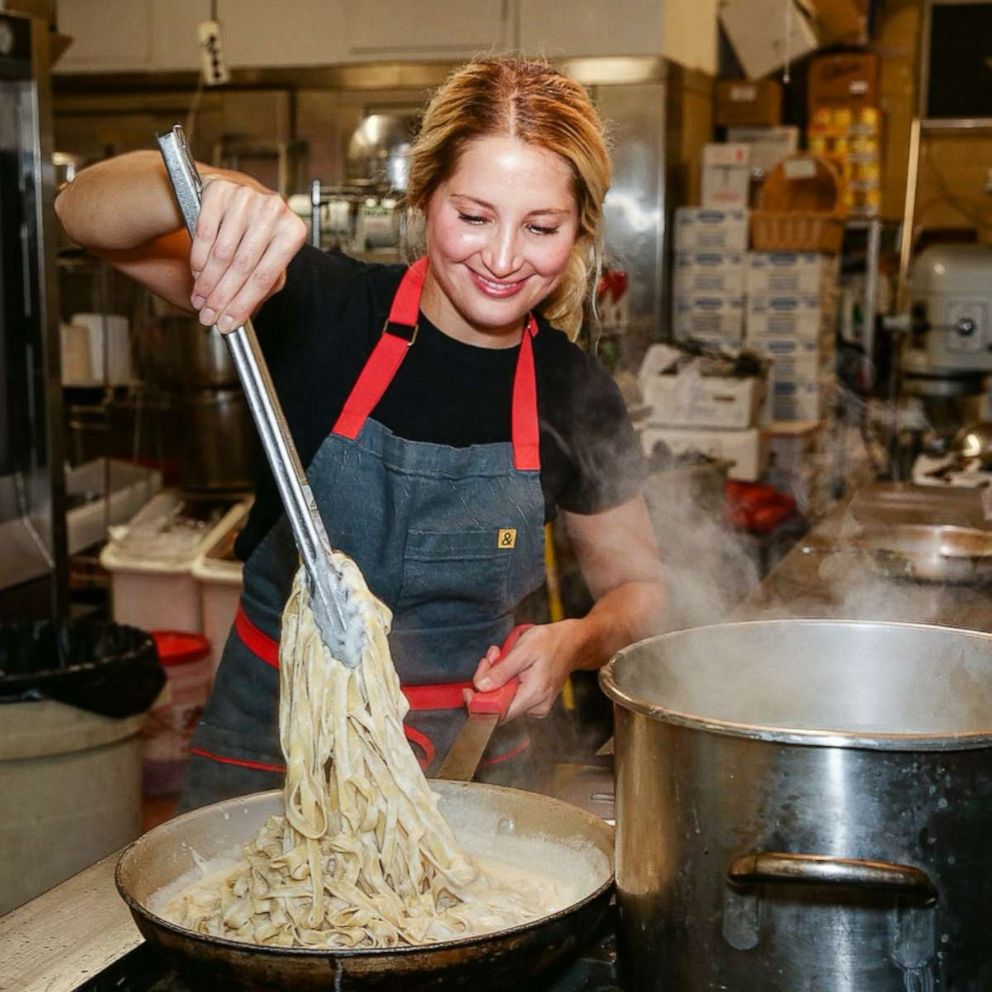 Sarah Raffetto throws her family’s pasta into a pot of sauce for a Petite Pasta Joint dinner.

After hosting her own birthday dinner in the showcase, which also has a full kitchen, Raffetto said she embarked on a “quest” to find “cooks and chefs to have dinner parties with.” punctual” and came across Fedner’s Instagram, where Fedner had tagged a plate of Raffetto’s pasta with sage and mushroom sauce.

“I could tell whoever this person was, they were extremely passionate and hardworking and really knew their stuff,” Raffetto said.

“This is probably the only time in history where egg pappardelle has formed a company with two people,” added Fedner, who posts his creations on Instagram under the handle @foodloversdiary, with a laugh.

Since the creation and launch of Petite Pasta Joint in June 2019, the pop-up dinner series has taken off, with a waiting list of over 5,000 hopeful diners.

The service offers guests a delicious and unique seven-course dinner with Fedner and Raffetto integrated throughout the evening, from start to finish: cooking in the scullery, presenting each dish and telling a personal story about it.

“Sarah and I have so much fun with our dinner parties, and we always say we’re proudly unfashionable. We serve dishes that mean something to us,” said Fedner, who grew up in a Russian-Jewish family.

“You’re here for the story and Sarah and I come out with each course to tell you a little bit about what you’re going through, what we’re cooking up and why it’s important,” Fedner said. “…We love each other and we love what we do, and I just think that’s what makes Petite Pasta Joint so special is that closeness to the source and to what we do.” 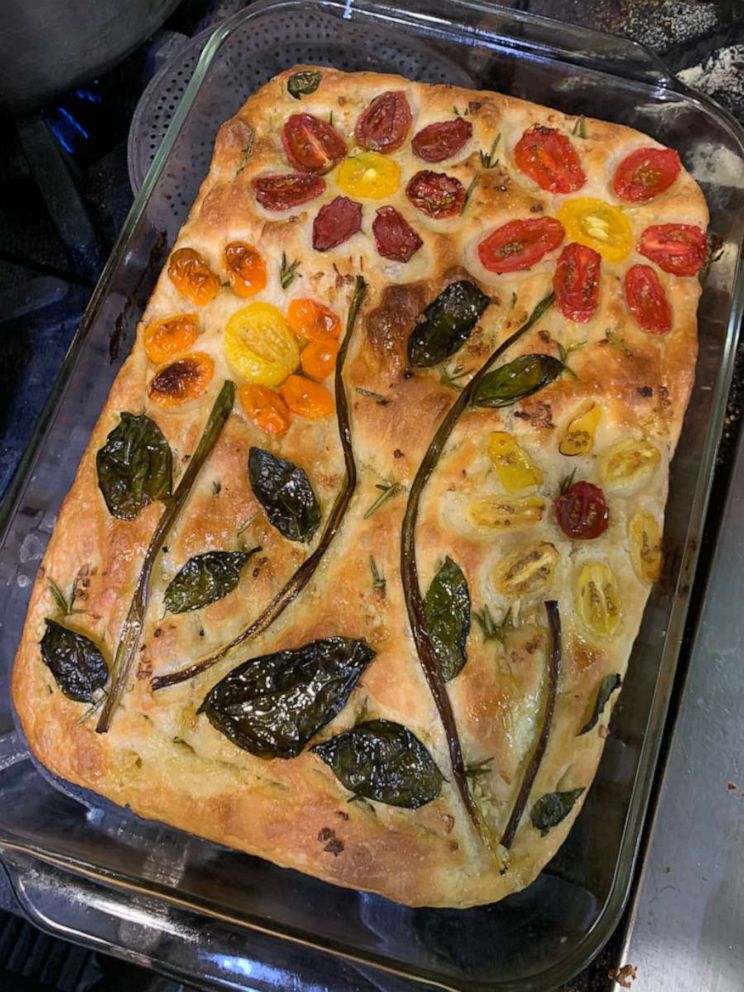 “Italian is the most beloved cuisine in America – in New York we have hundreds, if not thousands of restaurants. It’s the most saturated cuisine you’d ever find yourself in, and something that’s so important to me is to find a way to differentiate not just because of the space, but also because of our friendship and our relationship that is so evident and really felt throughout the room and throughout dinner,” Rafetto continued. .

The couple’s seven-course dinner usually includes a few must-haves, including hand-cut and hand-stuffed pasta, with seasonally-inspired iterations on tried-and-true recipes. 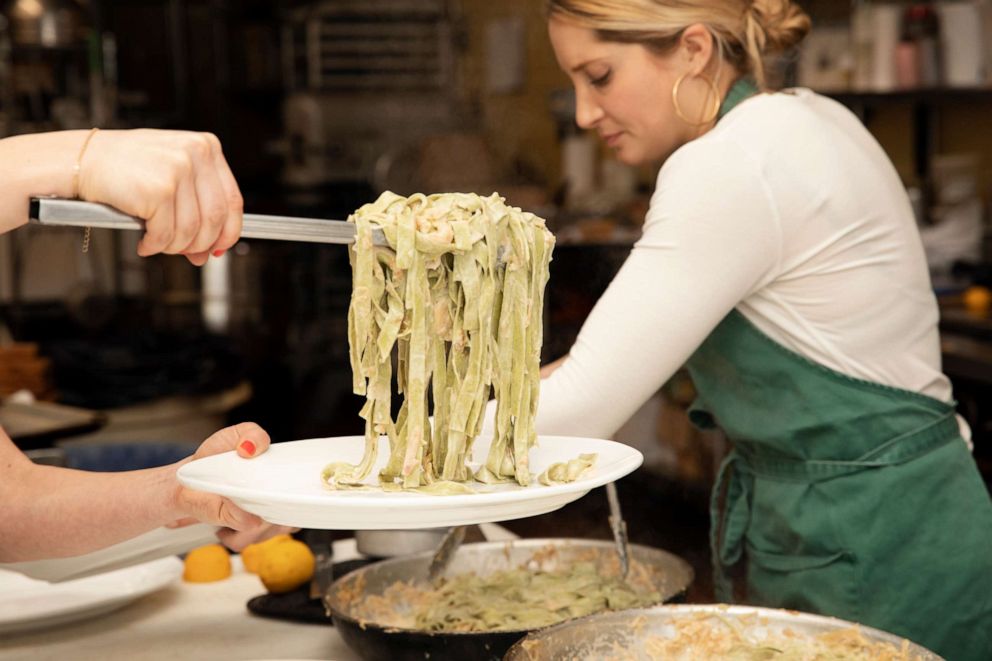 Sarah Raffetto in the kitchen cooking for a Petite Pasta Joint dinner.

“We have a Petite Pasta Joint signature dish every dinner — we have filled pasta that we make by hand,” Fedner said. “We love the process of making pasta because that’s really where Sarah and I bond.”

For fall, they’ve also created a version with butternut squash, which Raffetto says is inspired by his family’s ravioli recipe by using amaretti cookies in the filling to firm the inside and add depth. of flavor.

“Because the sauce is savory and nutty, it works so well when we have the contrast,” Fedner said.

No two Petite Pasta Joint menus are the same, and the BYOB party traditionally begins with a story about how the couple got started, as a plate of bread is added to the communal dining table. From there, it’s a side dish of vegetables or salad, depending on the season, for the second course. This course is followed by another small plate and then the main event – the pasta. Three pasta dishes are served in succession family-style with a brief break in the middle of the meal to watch Raffetto demonstrate how to use his family’s old-fashioned pasta-cutting machine.

“One of my favorite parts of dinners is when Sarah physically demonstrates to all of our guests how to cut pasta on the century-old pasta cutter – dinner and show,” Fedner said. “It’s such a personal experience and Sarah and I are the ones physically preparing the food. We’re the ones who set up the space for those who clean up in the back – he’s our love child, and we have a hand in every part.”

The meal ends with a sweet, which during the summer meant sweet corn ice cream with miso caramel. 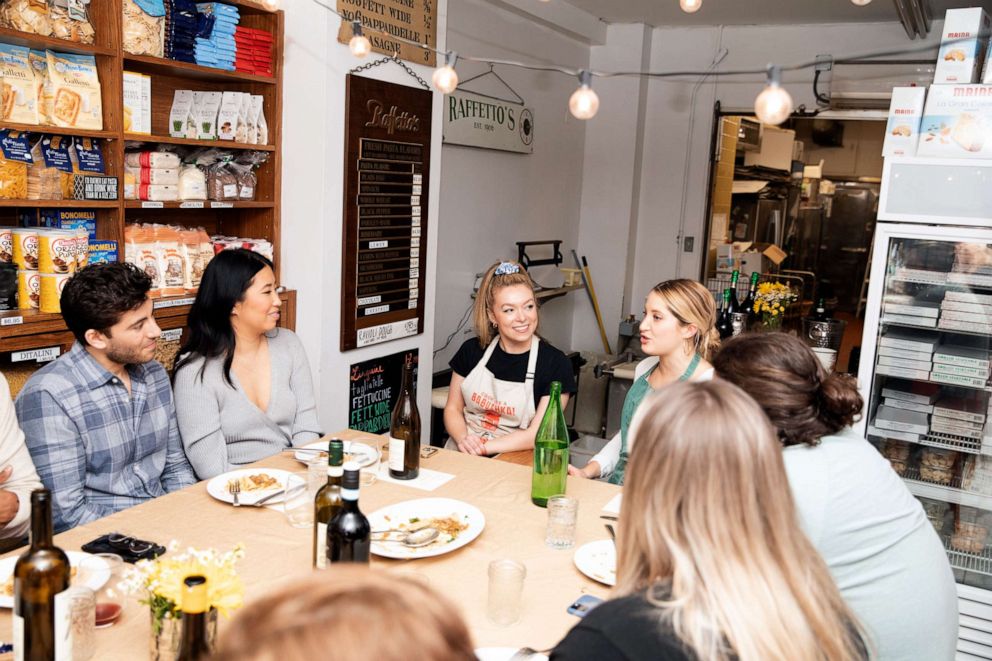 Emily Fedner and Sarah Rafetto chat with their guests at Petite Pasta Joint.

These days, the couple hosts about four dinner parties a month and sends out information about future dinner parties via digital mailing lists. But sometimes, Raffetto said, they share last-minute overtures to the platform where it all started — Instagram DMs.