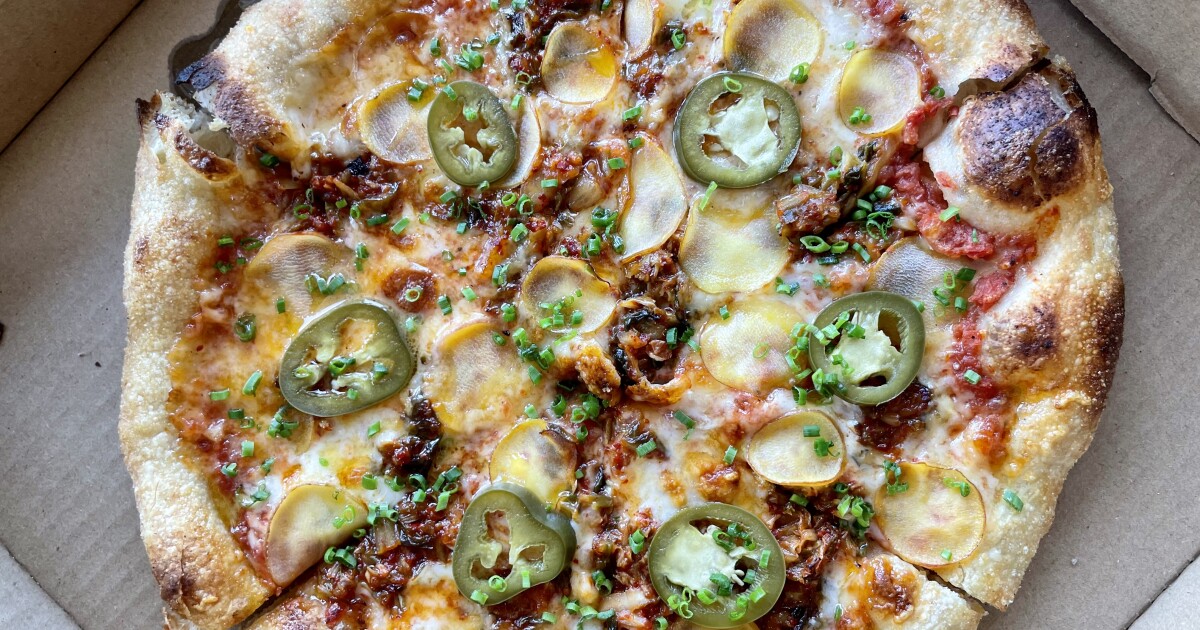 It’s hard to pinpoint chef Mario Alberto’s style of cooking. He grew up cooking traditional Mexican dishes with his mother and spent time in the kitchens of the very Californian Gjelina, the Peruvian restaurant Mo-Chica, the Mexican plant-based restaurant Gracias Madre and the popular gastropub Freddy Smalls. So it’s no surprise that he’s making potato and kimchi pizza at his new vegetarian restaurant in a mall in Koreatown.

It’s been years since Roy Choi put kimchi and melted cheese together in a quesadilla on his Kogi BBQ truck. And the world (my world) has never been the same. Alberto’s pizza is a smart take on this specific pairing of flavors. His crust is nicely charred, with tiny crisp bubbles all over. It uses both Gruyère and Beemster Gouda for a nutty butter cheese base that plays up the funk of spicy, fermented cabbage. He turns up the heat with a ton of chopped kimchi that wilts and gets mushy in the oven. And he sprinkles the pie with slices of fresh jalapeño that never quite mellow during baking.

It’s a combination of flavors that blithely defies all food boundaries. More kimchi on the pizza, please.

Ori Menashe spent a year and a half developing her shawarma recipe for the new Saffy’s restaurant in East Hollywood. The chef, best known for his Bestia and Bavel and his wife Geneviève Gergis, recently opened Saffy’s as a more casual operation centered around a menu of kebabs and shawarma. This shawarma is the result of months of trial and error, testing and retesting, inspired by a trip halfway around the world to visit chef Musa Dagdeviren of Çiya Kebap and Çiya Sofrasi in Istanbul and put in stage for two days in his kitchens.

I tried to contemplate the work, the thought and the air miles that went into the dish in front of me. But after watching the meat swirl around for a good 20 minutes, dripping, glistening and dripping with its own juices, I ate like someone had fired a gun when it hit the table. I quickly tore off pieces of laffa and used them to rock the hot shards of shawarma, feeling guilty that I had completed Menashe’s nearly two-year labor of love in minutes. But I couldn’t help it.

Menashe’s shawarma is a revelation. It stacks alternating layers of thin slices of Australian Wanderer beef with slices of California lamb and patties made from ground versions of both meats. “The patties lock in the juices and help get the texture just right,” he said during a recent restaurant meal.

The meat melts into itself, rich in umami, the sweetness of beef fat and just a whisper of game from the lamb. It also blends into the laffa, taking on an almost creamy quality nestled in the warm bread. It is served with fresh tahini, the tiniest spoonful of ajika chili paste and a dollop of chopped onion, parsley and sumac salad that looked and tasted refreshingly green.

If you go, ask for some Menashe “chili crunch” sauce to eat with your shawarma, and just about anything else on the menu (it comes with the skewers). It’s his version of an Asian crispy chili: hot, sweet, smoky and crunchy with red pepper flakes, Aleppo pepper, Kashmiri pepper, Hungarian paprika, urfa, clove and Hawaiian spices (cumin, coriander, turmeric).

There’s nothing subtle about the grilled sausages at Nok’s Kitchen in Westminster. They are the meat equivalent of an exhibitionist – a flavor show pony. You could make a meal out of just a few of them. With pronounced, spicy and tangy textures, they have the complexity of a good wine and satisfy like a mixed dish.

“I buy my meat from Costco and cut and grind it myself,” said chef-owner Nokmaniphone Sayavong.
boasted on a recent visit. “I make it with lemongrass, garlic, red onion, green onion, black pepper and chili flakes.”

The former restaurant waitress and IT student started selling her sausages soon after the pandemic hit and recently opened her bricks-and-mortar store in a small shopping center in Westminster.

It coarsely grinds the pork butt for the sausages, as well as the herbs. A bite might surprise with a quarter clove of garlic. In another, you might find a whole piece of diced green onion or a ribbon of red onion. The bitter, almost floral sharpness of the lemongrass is ever-present.

I devoured a whole sausage before noticing a small cup of green jeow som on the side. The sauce is topped with fresh lime juice, fish sauce, garlic and Thai chili peppers. You can dip the sausages in the sauce or not. With raw dueling flavors, I chose the latter and saved my sauce to eat with leftover sticky rice.

“I learned basic recipes from my mother when I was growing up in Laos,” she said. “I was the eldest, so I had to learn to cook at 8.”

There was also a crispy rice salad, served with squares of sour sausage, torn fresh herbs and peanuts. It was similar to the nam khao tod I’ve had in many Thai restaurants, but the grains of rice were clumped together, more like broken pieces of good tahdig with a slight coconut flavor. The irregular rice cakes were crispy with a chewy middle, which Sayavong says comes from his use of Japanese rice. This stimulated in me an even more vigorous appreciation of high carbohydrate salads.