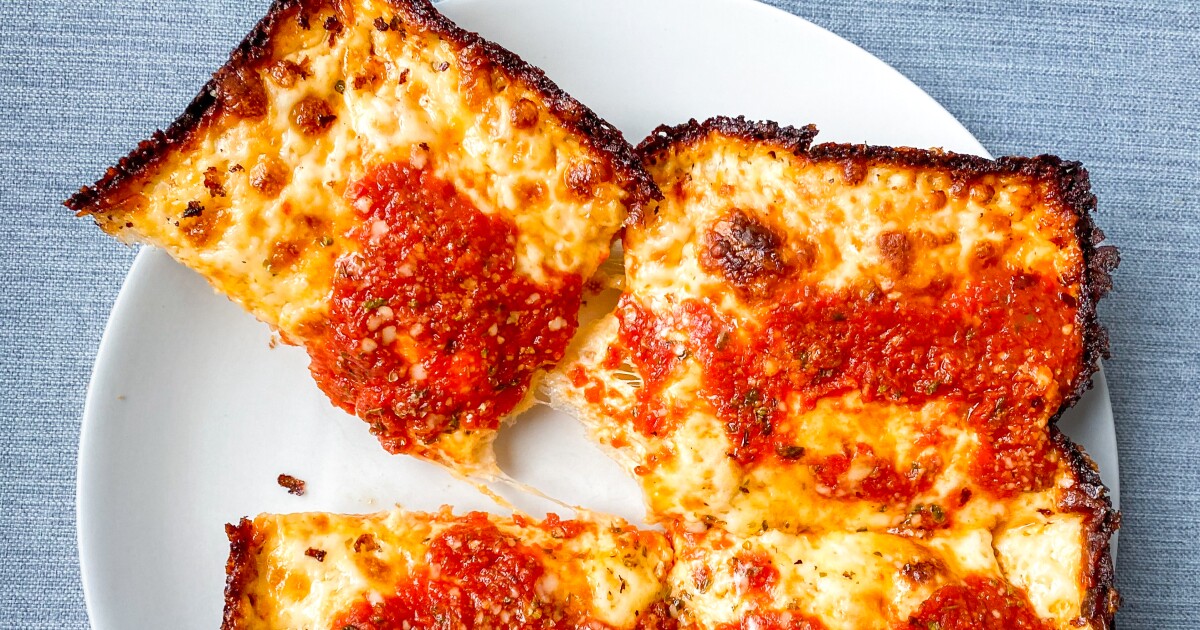 “Your order will be ready in 15 minutes!” read the automated text from Secret Pizza LA. “FYI, if you’re not there and I can’t get it to you, you’ll have to wait 5-15 minutes until the next pickup.”

All due respect to a pizza pop-up that expects speed. The point was taken. I was also in the middle of a mission: to try as many great new pizzerias that had opened last year as possible. I arrived early.

It was a recent Saturday night, and a month before Sean Lango moved from baking his “East Coast” pies in his apartment oven to a space in Montecito Heights that previously housed another pizzeria. I stood outside the restaurant door for a few minutes, chatting with a mother and son visiting from San Francisco who were also waiting for their order. Obviously, Secret Pizza wasn’t really a stranger anymore.

Do you like this newsletter? Consider subscribing to the Los Angeles Times

Your support helps us deliver the news that matters most. Become a subscriber.

At my allotted time, I walked through a dark little courtyard with scattered tables and chairs and opened the door to the restaurant. Lango was working alone, as he always does – a one-man business, building, baking and packing the pizzas. He looked up from the counter with a warm smile, handed me my pie and motioned for paper plates and napkins in case I wanted to sit down and eat outside. I did it, and others too with hours of pickup before and after me.

It’s a golden time for pizza in LA. You can find just about every Americanized style of this world-famous dish: wide, soft New York slices; individualistic variations on Neapolitan archetypes; deep dish Chicago; Detroit-style medium-thick pizzas with caramelized cheese edges, an ongoing national craze; and the similar “grandmother’s pies” attributed to Long Island. About the only thing I can’t find in Southern California yet is an exceptional version of tomato pies and clam pies, baked in charcoal ovens, perfected in New Haven, Connecticut.

With so many new pizza fads available, I gave the least thought and attention to the New York/New Jersey type of pizza that was ubiquitous in my Gen X mid-Atlantic upbringing. But wow. Lango’s work. He’s a New Jersey transplant with no professional cooking experience, but he captures the essence of his home country. It hits all the marks: an evenly tanned crust, a mix of sweet and sour and umami and flavor in its marbling of cheese and sauce. As a child, I liked this kind of pizza with extra cheese. Turns out I still prefer it.

I thought about when, in the mid-1990s, I was working in restaurants in New York and generally struggling through life. I had been trying to be vegan for six months, but one day I walked past Sal & Carmine Pizza on the Upper West Side and gave in to the craving for a slice of cheese. It took a little longer to get back to meat, but dairy has been back in my diet ever since. And a fresh secret pizza pie, I dare say, was way better than the stiff, reheated triangles I lived on in my early twenties.

Pizza is multidimensional in its appeal: a summoner of nostalgic memories, and also a canvas through which we experience the imagination of its creator. Tradition and innovation flow freely in the hands of Angeleno chefs, pizza included. Aaron Lindell, Quarter Sheets’ head pizza maker at Echo Park, sometimes lays out Balinese-style sambal — made by sisters Celene and Tara Carrara, who run pop-up Bungkus Bagus — as a fiery base among toppings of pepperoni, d pineapple and pickled jalapeños. Lindell’s wildness with a Detroit-esque model is as welcome as Lango’s faithful and transporting Jersey pie.

I have ranked my new favorite pizzerias. Secret Pizza and Quarter Sheets are among them, but here’s a reminder to be compassionate customers in these ever-crazy times. I saw on social media over the past two days that Secret Pizza had some minor plumbing issues and that Lindell had contracted COVID-19, although co-owner and cake genius Hannah Ziskin and the rest of the team of Quarter Sheets are doing well. Maybe give them some space this weekend? And then next week: Come down.

The LA Times Food Bowl returns in September with a month of events, starting with a September 1 launch party at the Grandmaster Recorders in Hollywood. Mix chefs for the event’s tastings include Jon Yao from Kato, Natalia Pereira from Woodspoon, Nicole Rucker from Fat + Flour, Ludo Lefebvre from Petit Trois and Justin Pichetrungsi from Anajak Thai, which is the restaurant of the year 2022 from the Times. .

Tickets are $150 per person; the LA Food Bank is the event’s charitable partner. Also check out the other dinners and events of the month.

— Micheladas have their moment! Stephanie Breijo, Jenn Harris and Daniel Hernández name their picks across LA Daniel also breaks down the five basic types of micheladas (botanera for me, please) and considers when extravagant toppings for the beer cocktail go too far.

— Jervey Tervalon writes about one of the must-haves of the summer: “California Soul,” Alta Adams chef Keith Corbin’s memoir of his childhood in Watts and his passion for cooking. Corbin will join the LA Times Book Club on August 23 to discuss the book.

—Black Restaurant Week returns to Los Angeles August 19-28…and more news of the week from Stephanie.

2022-08-13
Previous Post: Fabregas breaks his silence on why he threw pizza in ‘Battle of the Buffet’
Next Post: No fettuccine for you: Tel Aviv’s ‘Pasta Nazi’ goes viral