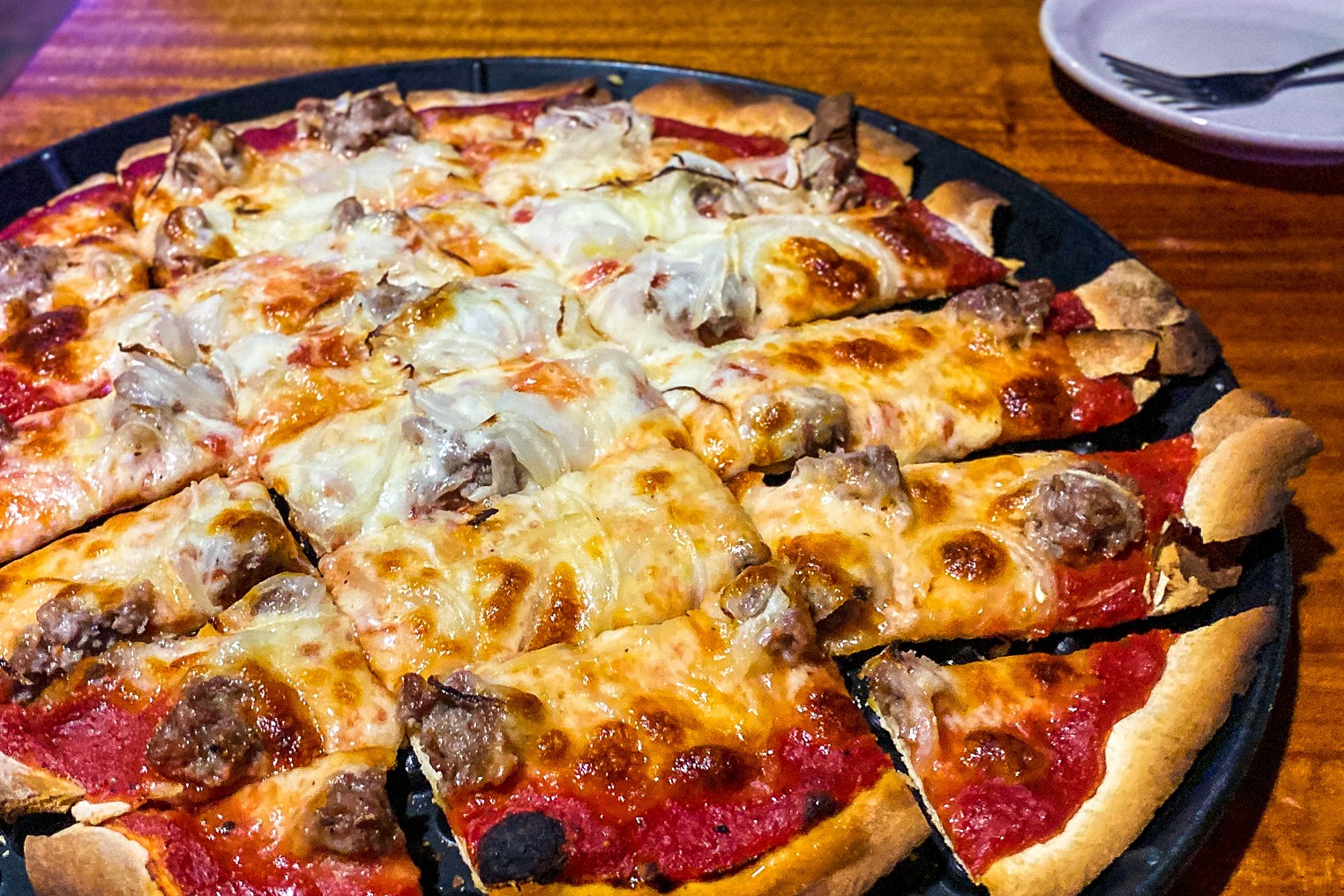 In the (hopefully) never-ending quest to find a good tavern-style thin-crust pizza in North Texas, we turn to Louie’s, a Dallas institution that, according to word of mouth and various social media, serves supposedly the best thin crust pizza in the area. Consider this a companion and update to our recent exploration of this style of Chicago pizza. And who knows? Perhaps one day, Rosati’s will be added to this ever-growing sampling of local thin-crust offerings.

Around 7 a.m. on a Wednesday evening, Louie’s was already packed. There is a more traditional seating area to one side which was not used, but there was plenty of seating on the bar side. Indeed, it had that vibe of a Chicago tavern, albeit much cleaner and with better lighting. While there was an Old Style sign on one of the brick walls, there didn’t actually seem to be any on the menu.

They had local beers such as Revolver’s Blood and Honey, and some domestic ones such as Fat Tire and Goose Island. I thought about trying to imagine a few southerners in a Berwyn corner tavern arguing about Stan Mikita over a bottle of Goose Island, but that seemed highly unlikely. Time flies, and so do old and obscure sports references.

No Old Style beer here and we’re not mad about that.

We ordered a large sausage and onion pizza (14 inches), which is our go-to when trying a new pizza somewhere. This at least gives us a somewhat comparable frame of reference; let’s not judge pineapple and prosciutto pie in one place against pepperoni and sausage in another, shall we? It took about 15 minutes to get to our table, and in the meantime the bar filled up even more with young hipsters, older sports fans, and middle-aged couples. The server warned us that it was hot from the oven, and it was indeed.

The verdict? Well…preference for pizza is a personal thing. One man’s trash is another man’s treasure. It was of course not a trash can, but it was not a treasure for us either. The pros: the sauce was wonderful and complex, clearly cooked with time and care and homemade. The sausage was good and chunky rather than the less appealing variety. The crust was the right smoothness and was not undercooked. 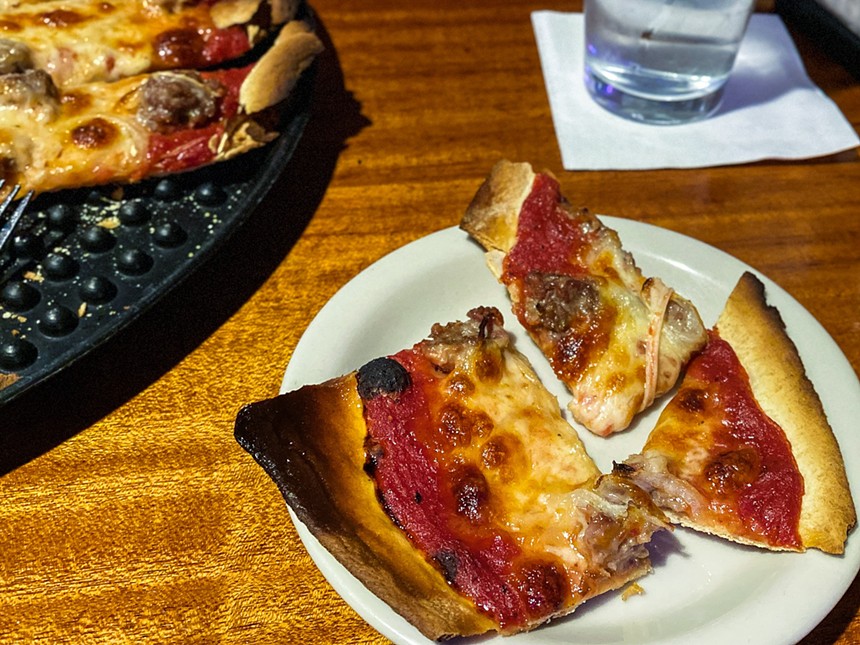 thin slices, including the coveted corner

The inconvenients? Unfortunately, for us, there were. It’s still great tavern style pizza, but it’s not at the top for us. The crust was maybe a little overcooked, which I’ll take care of being undercooked, but still. The toppings and sauce didn’t go all the way to the edge of the pizza, but rather stopped within an inch. The toppings were a little sparse and oddly evenly distributed, with the majority in the center, which meant that the otherwise lovely corner pieces were almost devoid of any toppings except for a bit of sauce. Also, the pizza was not cut into squares but rather into long rectangles, much like how Campisi’s or i Fratelli cut their pizzas. That’s okay, and of course it doesn’t affect the taste, but call me a traditionalist. 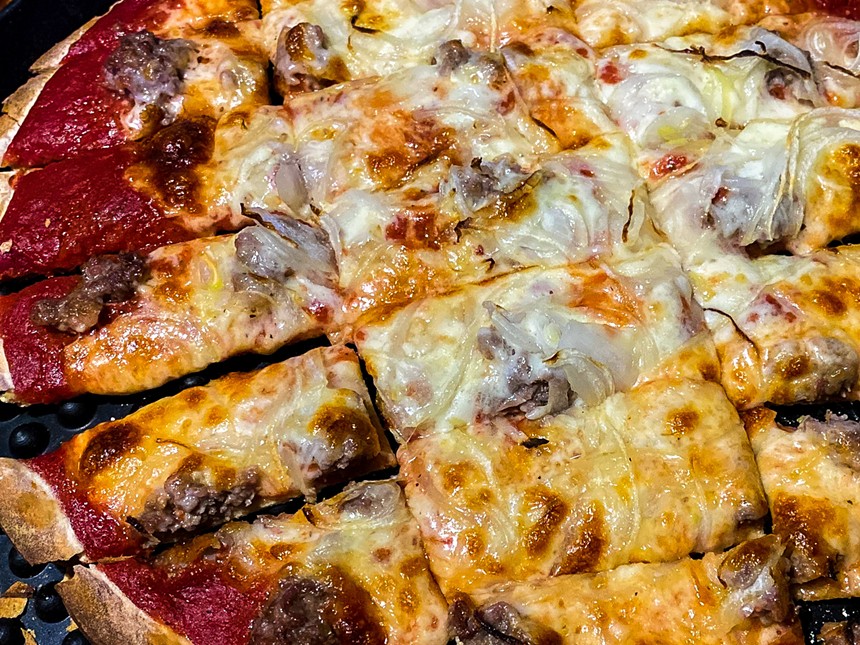 the slices were more rectangular than square, for those who love geometry.

We were glad we finally got to try Louie’s pizza, and will probably be back, but for us it just didn’t live up to the hype and hype. We really wanted to like this pizza. They offer a great atmosphere and decent pie, and it’s obvious why it has such a loud (and vocal) following. We just expected more.

2022-05-26
Previous Post: A Dickson woman starts a pasta company named after a dog. From banks to linguine.
Next Post: Should I thaw frozen pizza before baking?