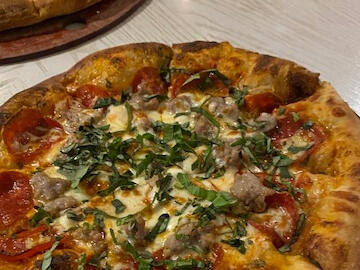 There was a restaurant in the Barrington area that I always overlooked because of the negative reviews.

I had read that the restaurant was pretentious, overpriced and the food mediocre. I ignored the bad reviews and decided to check this place out myself.

The name of this restaurant is Hampton Social in South Barrington.

The night I dined at the Hampton Social was a Tuesday. There was live music in the bar. The restaurant was also a bit busy for being on a Tuesday evening.

The decor at Hampton Social in my honest opinion is fabulous. I love that they went with an upper class beach theme. The use of whites throughout the restaurant really brings out other colors.

I had a very warm overall feeling like I was at a friend’s stylish beach house while dining here. I was greeted by our server who was very friendly. Our server informed us that there was 50% off all rosé tonight for happy hour. Our server also told us that all Woodfire pizzas were 50% off.

I wasn’t drinking that night so I tried one of their mocktails. It was a sparkling grapefruit drink topped with mint and orange that was absolutely delicious.

They serve the table with water and an extremely small glass. I was told there was an option to buy water in a much bigger glass with ice.

I started with a few appetizers. I ordered their loaded fries which was a blue cheese drizzle with real blue cheese chunks.

I also ordered their version of Rockefeller oysters Called Saint Charles oysters. My wife also ordered a bowl of their clam chowder.

The starters arrive at our table and they looked absolutely fantastic. The fries were delicious, my only complaint was that they were cold. I told our server just as a suggestion that the restaurant should think about possibly reheating the fries, it would make them so much better.

The Saint Charles oyster was also very tasty with creamy spinach and cheese on a fried oyster. My only complaint is that the spinach was room temperature and not very hot.

I ordered a wood fired pizza for my main course. I ordered the specialty pizza called The South Hampton loaded with pepperoni and sausage. My wife also ordered one of their specialty pizzas which had sweet corn and avocado.

These pizzas were so good, better than 90% of all the other wood fired pizzas I’ve had.

I was also completely full but wanted to try their desserts. I ordered their three-quarter Tres Leches cake with fresh strawberries and their banana cream pie which came on a waffle.

The Tres Leches cake was good but I wouldn’t order it again, the Banna custard tart on the other hand was fantastic. The waffle on the bottom was a bit overcooked and hard but the flavors were fantastic.

The dishes were absolutely up to par. I really enjoyed everything I ate.

A bill came to the table and it was just under $130. Many items on their menu are expensive. It’s definitely not a budget dinner.

On my next visit I will definitely come for the pizza, it was one of the best pizzas I have ever had. You can’t beat the nine dollar price during happy hour.

The rest of the foods I found were overpriced. I don’t think the Saint Charles oyster was worth $22. The non-alcoholic drink I ordered called the shoreline was not worth nine bucks.

I think they go for the overall decor and ambiance with live music, definitely calls for another visit, I had a great time.

I rate Hampton Social 8 out of 10. It just goes to show that you don’t always listen to other people’s reviews, check the place out for yourself, you might be pleasantly surprised with your experience.