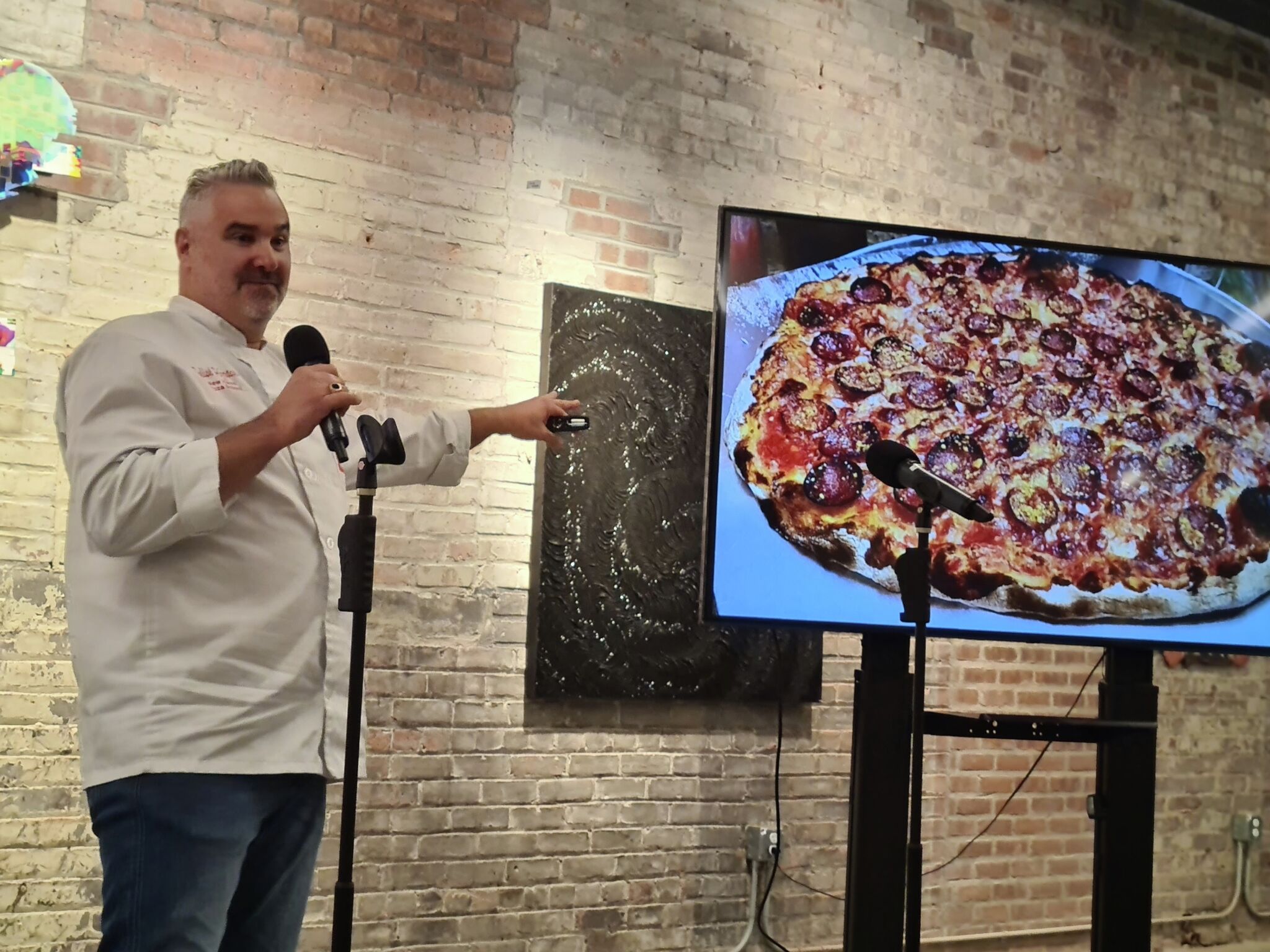 “Pizza in Connecticut is probably one of the most popular things,” Zabski said, beginning his presentation with a delicious photo of pizza.

“When do you want the money?” shouted one member of about 100 listeners upon seeing the image, before they’d even heard Zabski’s detailed idea.

It was once the scene of a community pitch at NXTHVN on Thursday night titled “Start In New Haven,” where residents were able to pitch ideas for new activities, startups, civic improvements, products, or events that they wish to see in Elm City.

Miles Lasater, an investor and co-organizer of the event, said he wanted to inspire more things to start in New Haven, the city where he went to school.

“I learned in improv comedy, when I was in college, the spirit of saying yes,” he said. “I also want to bring out that spirit more, so I want to encourage all of you tonight to think about what you could say yes to.”

For the hall of fame idea, Zabski said it would probably be a website, but his dream is to create a physical space for it and basically start an incubator that teaches people how to make pizzas in New Haven and helps them start a business.

“We can charge for entry, sale of merchandise, t-shirts, I mean we can go crazy with that stuff if the concept takes off, which I don’t know what’s going to happen,” said Zabsky said.

He was there Thursday night to find people who share the same passion and are willing to help him turn the proposal into reality.

Caroline Tanbee Smith, co-organizer, said one of the things that makes New Haven “the greatest little town in America” ​​is the people who work hard to make the city bigger every day.

Another innovator of the night was Ben Berkowitz, founder of SeeClickFix and owner of Ninth Sqaure skate shop, Plush. He wants to transform the existing infrastructure of each neighborhood into a skateable public art sculpture.

“It’s pretty simple, I want New Haven to have the most skateparks per capita in the world,” Berkowitz said.

The city currently has four skate parks, according to Berkowitz, at Edgewood Park, Scantlebury Park, the bowl on George Street and an unofficial underground park in Temple Street Garage.

He said these parks have proven to create an active and engaging local skating community. Three places on his mind included Criscuolo Park, Woodward Avenue Ice Rink, and as part of the State Street redevelopment.

Shayla Streater and Arden Santana presented “The Elements of Abundance”, a venture to build and restore communities across all generations on a deeper level.

One of the events the couple hosted was a dinner get-together called ‘Breaking Bread,’ where families can connect to un-isolate and bond better. Another was a platform for entrepreneurs and communities to connect for ideas.

Two other innovations launched on Thursday night were a standing bathtub designed to prevent young children from slipping and falling in adult-sized tubs, by Clovia McIntosh, and a decentralized healthcare data platform by Ananya Krishna.

The latter is believed to be done through blockchain technology, which reduces costs and the risk of a data breach for all parties. Krishna said his idea would provide people with 24/7 access to their health information and ensure that patients take ownership of their data.

“Our goal is to disrupt healthcare,” she said.

After six presenters presented their points, participants broke into groups to further discuss their ideas and come up with things they could say “yes” to.

“There’s no prize, but we provide a forum for a community to come together with new ideas,” Lasater said. “And we hope the connections here will lead to more new ideas.”

As Lasater noticed, people usually have lots of innovative ideas but either don’t have the resources or don’t know where to start.

That’s what Thursday night was all about, he said – “collaboration.”