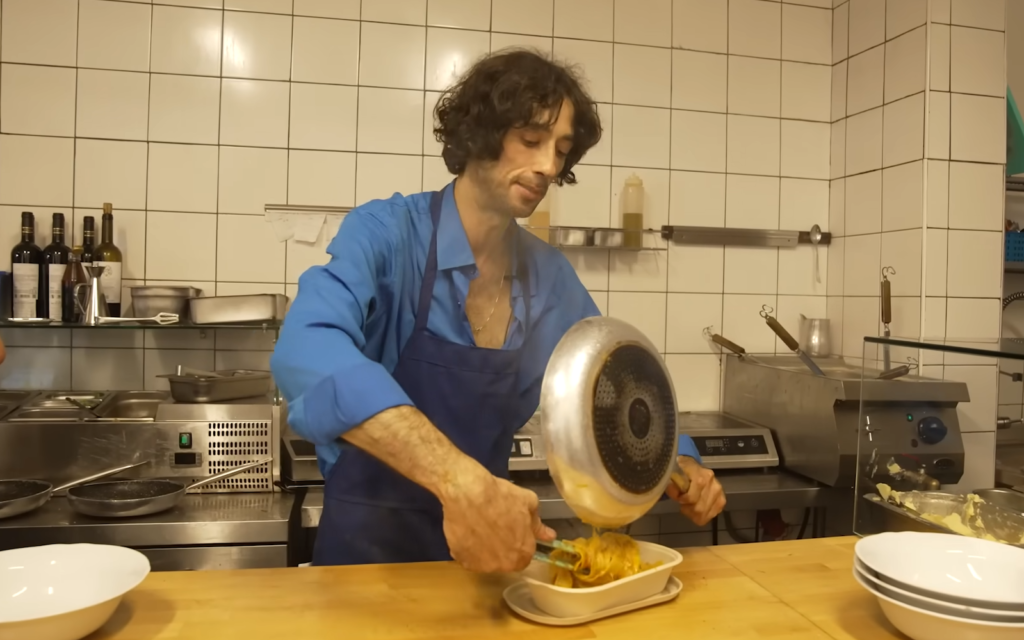 No fettuccine for you: Tel Aviv’s ‘Pasta Nazi’ goes viral

“The customer is always right”, goes the old adage. This is especially true in the restaurant industry, where managing a tight ship and ensuring prompt, cordial service are essential to the survival of a business.

At least, that’s how it used to work.

Israeli restaurateur Tal Rashevski shatters that convention — and the internet while it’s at it — with his brash but humorous attitude, temperamental management style and apparent indifference to customer concerns.

Rashevski’s exploits recently went viral after a short film by Kan documented his forward-thinking manner and unconventional work ethic, with social media calling him “The Pasta Nazi” – a play on the notorious “Soup Nazi” on “Seinfield”.

Tometomato, Rashevski’s fresh pasta restaurant in Tel Aviv’s grungy-yet-chic Florentine neighborhood, only opens on the days he feels like it and only for the few hours he can bother to work . If he doesn’t like the way a customer looks, he’ll tell them the wait will be extremely long. How long? Really really long. In fact, they probably shouldn’t care, but hey, it’s a free country.

In the seven-minute video, Rashevski, 36, is followed as he goes about his business. The Kan video has garnered over 100,000 views on YouTube (below, with English subtitles) and nearly 180,000 on Twitter.

“I love my clients, but I select them carefully,” he says. “When I see someone is a troublemaker, I get them out before they even order.”

He will also if he just feels too busy.

“One o’clock?” another asks. “Maybe an hour and maybe more,” Rashevski replies with a shrug.

If he wants to ensure high traffic, he can advertise promotions on his Facebook page, with no intention to follow. When curious customers come to inquire, he lies casually and absurdly.

“It’s in the oven, we had a mess,” he tells a person who inquires about the promised dish. “Uh, the cash register fell,” he explains (?) to another.

When the work gets too heavy, he can stop everything and go for a smoke break – the exasperated online clientele be damned.

How exactly does Rashevski hope to operate his restaurant with such an attitude?

Oh, he doesn’t. He absolutely does not. In fact, he often hates everything. But the money is too good, and the damn customers keep coming back for more.

“It’s like a couple who have been married for 30 years,” he says. “They have good sex but a bad relationship. It’s this case. I understand I need it, I understand it’s good for me, I love it and I want it to burn.

The place is open two or three days a week maximum, for about three hours at a time. If the servers don’t feel like coming on a certain day, that’s fine.

“Closed because we are tired,” reads the restaurant’s Facebook page.

On social media, dozens of users responded with their views on the infamous “Pasta Nazi”.

“Those who want polished service have plenty of other dinner options,” one wrote. “I kinda admire a man who only manages to work half a week and isn’t nice to customers.”

Others see a deeper meaning in it, saying Rashevski deftly punches holes in modern consumer culture, with its constant demand for care and pampering.

“I’ve never seen a more ingenious marketing trick than the moron doing himself a favor by not spitting on his customers’ pasta Florentine,” wrote another.

Asked by Kan about his plans for the future, Rashevski replies, “I want the restaurant to close in the future. This is my dream.”

Still, there seems to be a reason people keep coming back, and that’s the one thing he’s (sometimes) passionate about: pasta isn’t half bad.

Supporting The Times of Israel is not a transaction for an online service, like subscribing to Netflix. The ToI Community is for people like you who care about a common good: to ensure that balanced and responsible coverage of Israel continues to be freely available to millions of people around the world.

Of course, we’ll remove all ads from your page and you’ll unlock access to great community-only content. But your support gives you something deeper than that: the pride of joining something that really matters.

Join the Times of Israel community

Already a member? Log in to stop seeing this

You are a dedicated reader


We’re really glad you read X Articles from The Times of Israel over the past month.

That’s why we started The Times of Israel ten years ago – to provide discerning readers like you with must-read coverage of Israel and the Jewish world.

So now we have a request. Unlike other media, we don’t have a paywall in place. But since the journalism we do is expensive, we invite readers to whom The Times of Israel has become important to help support our work by joining The Times of Israel community.

For just $6 a month, you can help support our quality journalism while benefiting from The Times of Israel WITHOUT ADVERTISINGas well as access Exclusive Content only available to members of the Times of Israel community.

Thanks,
David Horovitz, founding editor of The Times of Israel

Already a member? Log in to stop seeing this