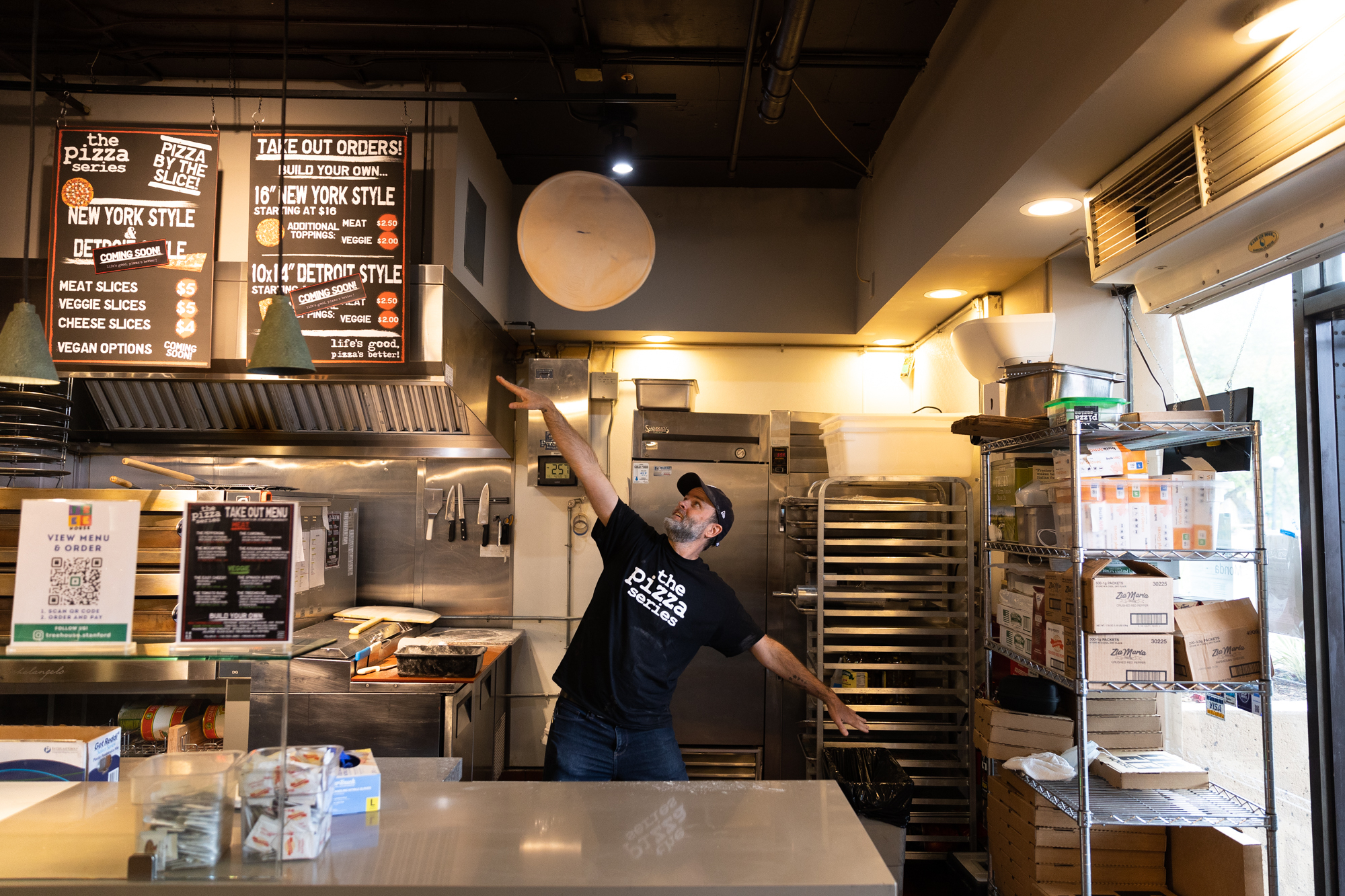 Step into The Treehouse on the Stanford University campus and you might see a disc of dough flying through the air and spinning like a basketball on the finger of World Pizza Champions team member Matt Driscoll. Opening his first brick-and-mortar pizzeria is the latest leg of a pizza-making journey that has included stints at Domino’s, opening a food truck with the help of Google and the service of pineapple on a pie during an international pizza competition.

The Pizza Series is the latest addition to Stanford’s dining options and first started as an Instagram feed where Driscoll shared his pizza creations. When the pandemic derailed his plans to open a food truck, he turned The Pizza Series into a Scotts Valley-based pop-up. Now, the competitive pizza maker serves New York-style pizzas with creative topping combinations and Detroit-style crispy-but-airy square pies on the peninsula.

Then 19 years old, Driscoll landed his first job in the pizza industry at Aptos Domino’s in 1997. As this experience laid the foundation for his future career, Driscoll went on to explore other industries like construction and the music. He even formed a label called SAF Records, which he still runs.

“Pizza kept finding me,” Driscoll says. In 2004, a car slammed into Driscoll’s house and he ran outside in a panic. Although the two hardly ever spoke, Driscoll’s neighbor invited him over and the conversation eventually turned to pizza, as Driscoll’s neighbor had taken over the straw hat pizza from Aptos and was looking for some cooks. Driscoll accepted an offer to work there and fell in love with the pizza when he was given control of the dough recipe and even the restaurant’s decor. “It was almost like running my own restaurant,” Driscoll says. The duo eventually dropped the franchise label and was renamed Brando’s Pizzeria.

When Brando closed, Driscoll moved to Pizza My Heart, learning to handle a high volume of orders and to mix dough by hand. Three years later, in 2009, he opened the pizzeria at the Whole Foods site in Santa Cruz, a job that brought him into the world of competitive pizza making.

Pizza contests are usually held at international trade shows and events and serve as a way to promote the pizza industry. While the competitions include events judging taste and presentation, they also incorporate unexpected categories like pizza box folding and dough stunts. Harnessing tough, salt-rich doughs without yeast, dough stunt competitors perform elaborate tricks that go far beyond the up-and-down toss you might observe in a pizzeria.

Whole Foods Market sponsored Driscoll’s participation in these competitions, including the International Pizza Challenge in Las Vegas. Driscoll, who learned to mix dough by tossing kitchen towels, developed choreographed four-minute routines and handy tricks, including shoulder rolls, where the disc of dough spins on one arm, on his back and in his other hand, and launches this launch. the dough 15 feet in the air. (Visit the Peninsula Foodist Instagram account for a video of Driscoll in action.)

While dough stunts may have been Driscoll’s signature event, he also competed in fastest box folding (he assembled five boxes in 18 seconds), biggest dough stretch, and categories based on taste and visuals. Having access to Whole Foods’ entire selection of specialty items, Driscoll experimented with countless cheeses and toppings, many of which can be seen in The Pizza Series offerings.

One combo, which earned him third place in his region, was a raw vegetable pizza that incorporated thin slices of cucumbers, peppers, tomatoes and carrots layered over goat cheese. It was then finished with pine nuts, prosciutto and balsamic glaze. Even competing in the traditional category, which limits competitors to two common toppings, Driscoll turned peppers into a stir-fry mix with Calabrian sausage and finished just short of first place. He even served pineapple on a Hawaiian barbecue pizza and was surprised by the suspicious responses he received from some pizza purists.

Since 2018, Driscoll has been part of Tony Gemignani’s World Pizza Champions, an international team that serves as “pizza ambassadors” through contests and public events. Overall, Driscoll enjoys how the competitions provide culinary inspiration from around the world (he’s always amazed by a poke pizza topped with raw fish) and an opportunity to dive into the science of the dough in order to make the improvements. the smallest to its recipes.

“It’s not necessarily about winning contests. It’s about who has a passion for the craft and who demonstrates that love for pizza,” he says.

After seven years at Whole Foods Market and opening pizza counters in stores across the Northern California region, Driscoll took another break from the industry with a year of construction. Still, he continued to experiment with pizza at his home in Santa Cruz. He created The Pizza Series Instagram account to chronicle his creations and was surprised by its popularity (he now has over 12,000 followers). His most elaborate pizza was a breakfast pie with a crust stuffed with sausage sauce topped with 15 eggs.

True to his goal of running his own pizzeria, Driscoll applied and was accepted into the Instrucktional food truck incubator program run by Google and Off the Grid. Driscoll, a Michigan native, pioneered a Detroit-style pizza-centric concept that has recently gained popularity across the country. Driscoll credits the late Shawn Randazzo, who presented Detroit-style pizzas in contests, with helping to popularize their thick, square slices, crispy, oil-fried bottoms, and caramelized cheese that spreads all the way up. to the edges of the pie. Often the toppings are placed with the cheese under the sauce.

Driscoll says good Detroit-style pizza is all about fermentation and hydration levels and prefers a slightly airy crust that looks heavy but feels like a feather. “It’s like having a grilled cheese sandwich,” he says.

While The Pizza Series food truck was packed and branded in the spring of 2020, COVID-19 caused the cancellation of the Instrucktional program. Driscoll, who takes on life’s challenges with ease, quickly set her sights on launching pop-up The Pizza Series, serving New York and Detroit-style pizzas at a Scotts Valley business park. “I don’t overthink things… The more fun you have, the more opportunities come to your doorstep,” he says.

The pop-up caught the eye of retired restaurateur and property manager Ray Klein, who runs three restaurants on the Stanford campus and has developed notable eateries including Tartine Bakery. Originally looking for a Detroit-style pizza consultant (Klein’s The Treehouse already served pizza on campus), Klein befriended Driscoll and the two became business partners.

The Pizza Series began serving its New York-style pizzas on the Stanford campus and had its grand opening with Detroit-style pizzas on Thursday, April 28. Customers can expect vegetarian and vegan choices among the slices and whole pies. Toppings include simpler choices like buffalo and BBQ chicken and vegetable combos, and will eventually include more elaborate options from The Pizza Series like “The Hidden Forest” with spinach, sautéed mushrooms, roasted garlic and whipped ricotta cheese. Driscoll will then showcase his Detroit-style breakfast pizzas topped with runny yolks, cheese and bacon.

Located in the heart of campus where students can sit and enjoy their slices in front of the pizza ovens, Driscoll and his team can watch customers devour their creations. “Their faces and their happiness, their positivity towards everything we do is probably the biggest thing,” he says.

The Pizza Series will also soon be opening a full restaurant in Scotts Valley.

Matt Driscoll isn’t the only pizza contestant with a local restaurant: Lars and Cristina Aceves Smith of State of Mind Public House & Pizzeria and State of Mind Slice House just had strong results at the World Pizza Championship, winning recognition in the Pizza at Pala and Pizza Classica categories.

Dive into food news. Follow the Peninsula Foodist on Instagram @peninsulafoodist and subscribe to the newsletter to get updates on the latest openings and closings, find out what the Foodist is excited to eat, read exclusive interviews and follow trends affecting local restaurants.

This story originally appeared on TheSixFifty.com, a sister publication to Palo Alto Online, covering what to eat, see, and do in Silicon Valley.

2022-04-30
Previous Post: AG Letitia James – NBC New York
Next Post: Mino Raiola went from being a pizza chef in Holland to engineering the biggest deals in the world