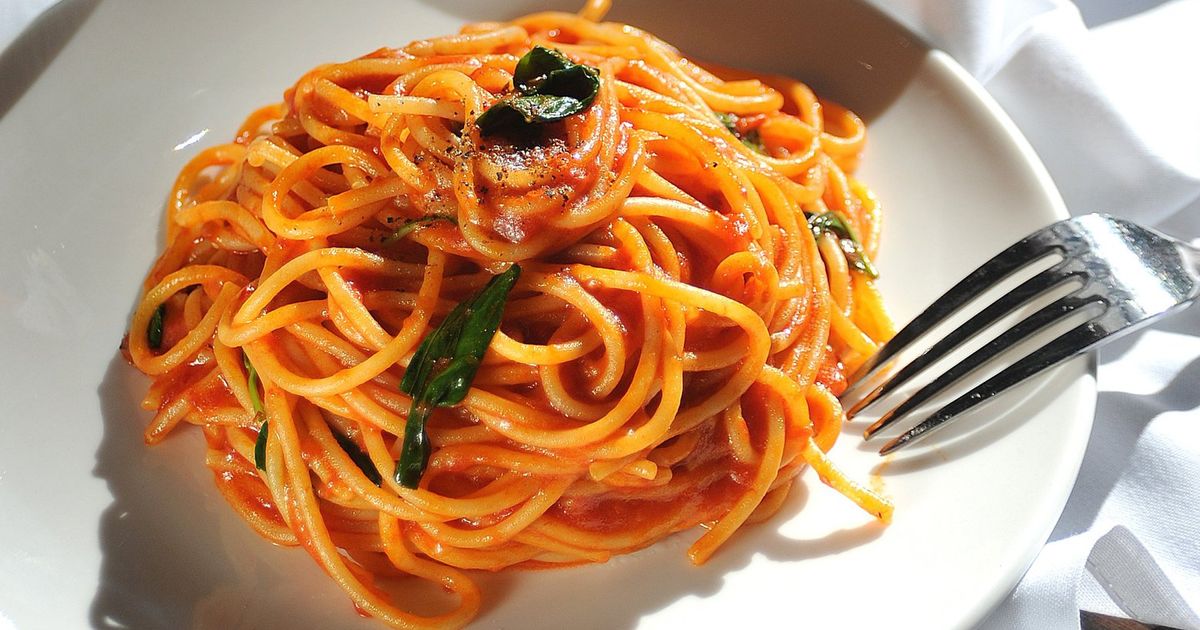 Try cooking this pasta in its own tomato-basil sauce

IF YOU COOK spaghetti in a large pot of water, drain it, then toss it with sauce, you’re pouring a lot of flavor down the drain, says Vendemmia chef Brian Clevenger.

“The trick to good pasta is cooking it in the sauce,” he says.

It was while working at Delfina in San Francisco that he really began to understand why. “Most places don’t because it’s so difficult. It’s the hardest “simple thing” we cook in our kitchen.

The technique is similar to risotto. After softening the noodles in boiling water, you finish cooking them in a sauté pan with the sauce, adding ladlefuls of cooking water until cooked. “It’s flour, egg, flavor that you add,” says Clevenger. Vigorous stirring creates an emulsion that allows the sauce to coat each strand. As with risotto, the tricky part is stopping before the noodles are overcooked.

Clevenger says the technique works with any dried pasta (he prefers the Rusticella brand) and with any sauce. They cook a lot of pasta this way in Vendemmia. “With all the starch building up on top of the pasta pot,” he says, “the best pasta of the night is the last one served.”

1. In a non-reactive saucepan over medium heat, combine the olive oil, garlic, and 1 tsp salt. Lightly sauté the garlic, turning to brown all sides. Remove and discard. Add the onions and cook until translucent.

2. Remove the saucepan from the heat. Gently add the tomatoes, including the liquid, to the hot oil. Cook the tomatoes over medium-high heat. Stir often with a wooden or rubber spatula, scraping the bottom of the pan so the sauce doesn’t burn. When the tomatoes break down and the sauce thickens (about 35-40 minutes), add the red pepper flakes. Pass through a vegetable mill. Stir the torn basil leaves into the sauce. Add salt and black pepper to taste.

Yield: About 2 cups of sauce, enough for four 4-ounce servings of pasta.

1. Put the tomato sauce in a non-reactive skillet large enough to hold all the pasta.

2. Bring a large pot of salted water to a boil. Cook the noodles until they are folded enough to sit comfortably in the pan, about 2 minutes.

3. Using tongs, transfer the noodles to the skillet. Immediately add 2 ladles (about 6 ounces) of pasta water to the skillet. Lower the heat to medium and bring to a boil. Stir with a spatula to gently agitate the noodles. The sauce will thicken and emulsify as it cooks. The pasta will puff up and you can move the noodles around without breaking them. Once most of the water has been absorbed, add more water, a ladleful at a time, and continue stirring. When the sauce starts to stick to the noodles, taste the cooking. When the noodles are still firm to the bite – al dente – stir in 2 tablespoons of olive oil and torn basil leaves. Remove from fire. Season with salt, pepper and red pepper flakes, as desired. Divide among four bowls. Garnish with more basil.