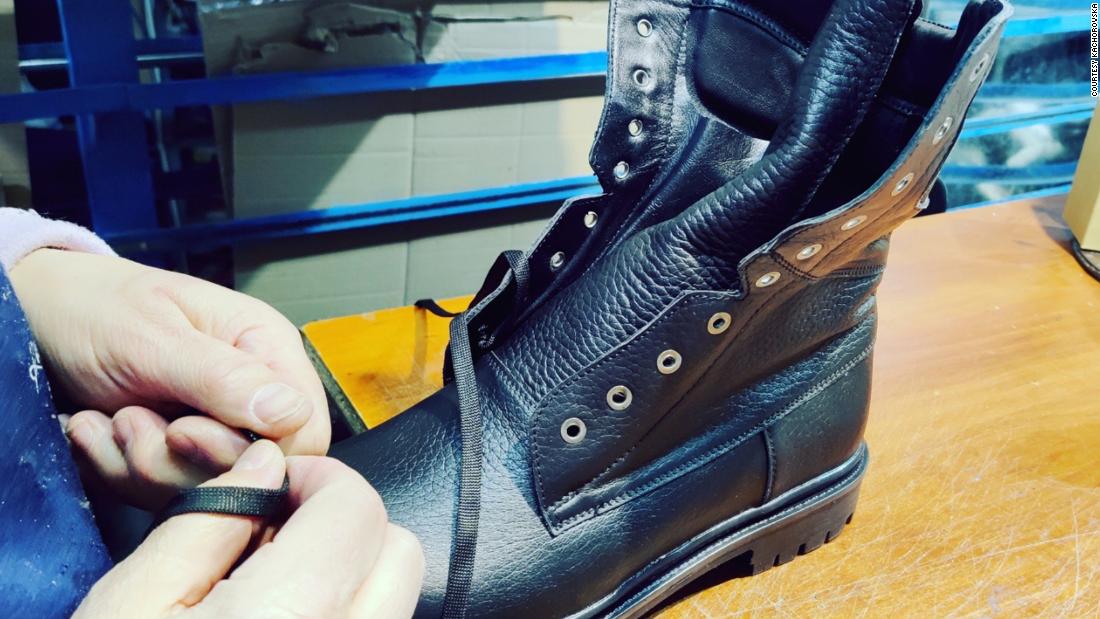 Wartime effort: Cobbler, pizzeria and bakery in Kyiv pivot to serve their country

A war rages around them and they are reminded how close the danger is every time the warning sirens sound in the Ukrainian capital.

They describe it as a jarring sound, but they push back the fear because they say Russia’s invasion of Ukraine, which began almost 50 days ago on February 24, has given them a new goal: to serve their community and their country in a different way.

Prior to the invasion, these entrepreneurs ran growing startups or family businesses passed down from generation to generation. Their businesses have sold products such as custom shoes, pastries and pizzas in kyiv’s historic district, as well as e-learning tools for students, teachers and professionals.

In the midst of the war, they refocused their missions and now use their resources to provide basic necessities such as food, first aid and even combat boots for the Ukrainian army.

It took just four days for TC Pizza, located in downtown Kyiv, to transform from a local pizzeria to a gathering center for a rotating group of volunteers preparing hundreds of boxed meals.

Anton Fursa, a Ukrainian cinematographer who is a co-owner of the business, said he closed the pizzeria on Feb. 24 when Russia began its assault on Ukraine.

“Four days later we were open and preparing meals for anyone who needed food,” Fursa said.

The intensification of Russian attacks in eastern Ukraine in recent days has exacerbated the need for food, he added.

Meals are simple – salad, potatoes and some meat. Volunteer drivers deliver them to hospitals for patients, the military, and families and seniors in need.

Fursa sometimes accompanies the drivers. The team must carefully watch for landmines hidden along the roads. Last weekend, Fursa returned from areas near kyiv which were heavily shelled.

“It’s absolutely catastrophic. I’ve been to Bucha and Borodyanka and it’s horrible,” he said. “People were so grateful to see us come with food.”

He wants to continue helping as long as he can.

“I think the worst is yet to come, but it’s much easier to understand what’s happening to our country when we do something to help people,” he said.

Ukrainian shoe brand Kachorovska has been manufacturing women’s shoes since 1957.

“A special story for us is that we also made a custom pair of shoes for Olena Zelenska, wife of our chairman Volodymyr Zelensky,” said Alina Kachorovska, third-generation co-owner and CEO of the company who runs the business with her husband and mother.

In its portfolio of leather and textile shoes, there is one specific item that the Kyiv-based company has never made before: combat boots.

Like other local businesses, Kachorovska did not know what impact Russia’s attack would have on her family business and its 117 employees.

“All of our market is in Ukraine,” she said. The family was finally preparing to expand the brand to other countries when war broke out.

“Everything stopped. I couldn’t believe we were at war,” Kachorovska said. As more Ukrainians joined the armed forces, her mother spotted a demand on Facebook for combat boots and other items soldiers needed.

This galvanized the family into action. Kachorovska said a few factories have joined forces to pool supplies for the boots.

“We already had the leather in our warehouse,” she said. “We used all the supplies and made 1,393 combat boots and gave them to our soldiers all over Ukraine for free,” she said. The company also made and donated belts for soldiers.

Staying busy and keeping her business alive through the turmoil is personally and professionally important to Kachorovska.

“If I don’t keep working and helping, I will be broken,” she said. “I have to be strong, support my employees and cling to a vision for the future.”

Vladyslav Malashchenko opened Good Bread from Good People in Kyiv in 2017. The bakery employs workers with special needs and provides them with vocational training.

“Before the war, we were doing very well,” said Alijona Martynenko, who handles communications for the company. The bakery sold cupcakes, cookies and pies to both commercial and individual customers.

“But when the war started, we didn’t see how we could continue,” Martynenko said.

On March 10, the bakery comes back to life. She said volunteers and some staff have come together to meet a growing need by baking bread.

“We went from being a bakery that didn’t make bread before to now making a lot of bread,” she said. The company makes up to 700 loaves a day. Last week he donated more than 3,000 loaves of bread to Ukrainian soldiers, police, hospital patients, the elderly and families with children who remained in kyiv throughout the Russian invasion.

“The community has given us flour and money to buy what we need,” she said, adding that cooking will continue until the ingredients run out.

Before the war, the kyiv startup developed online courses and manuals for students, teachers and professionals.

The company had 42 employees and more than 400,000 customers in Ukraine. The war abruptly interrupted his operations.

“Our employees have moved to other parts of Ukraine and now we have around 10,” Filipov said. “Everyone wants to come back and we’re optimistic that will happen.”

EdEra has also pivoted content on its platform to wartime education, Filipov said. “We create information on how to administer first aid, how to find bomb shelters, how to prepare for evacuation. This education could save lives.”

Alyona Mysko, co-founder and CEO of Ukrainian fintech startup FuelFinance, wants to ensure companies like TC Pizza and Kachorovska shoes remain viable and able to do the essential humanitarian work that is becoming increasingly critical in Ukraine.

“We provide Ukrainian small businesses with our services to help them for free,” she said.

FuelFinance has created a “first aid” resource kit for Ukrainian entrepreneurs with information on how to reorganize and keep working during the war. The company has created a platform to pool donations for small businesses fighting back.

“We are also advising them on how to temporarily relocate outside of Ukraine to Poland and other places so they can continue their business,” Mysko said. She also wants FuelFinance to stay active and grow during the war by adding more customers in Europe and the United States.

The Russian invasion only strengthened Ukrainian resolve, she said.

“The first week of the war we were scared. Now Ukrainians feel like fighters,” Mysko said. “There is no time to be afraid.”

2022-04-12
Previous Post: Cobbler, pizzeria and bakery in Kyiv pivot to serve their country
Next Post: A New New York-Based Pizzeria Will Open in The Brick This Summer | Vanessa Vanacore