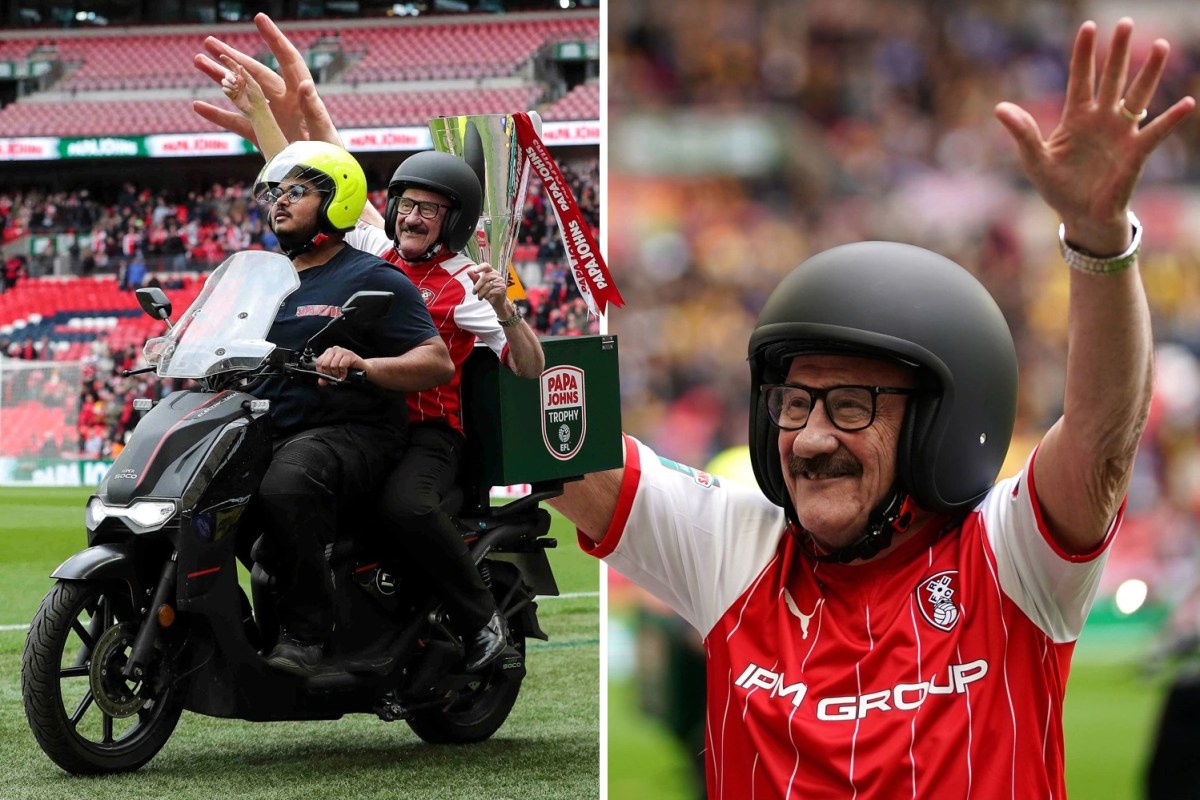 PAUL CHUCKLE had the last laugh as Rotherham came from behind to win the Papa John Trophy.

Chuckle, one half of the comedy act, the Chuckle Brothers, presented the trophy on a moped before kickoff in a public relations stunt.

And the Miller fan was all smiles full time as the outcome of the pizza cut was decided by a huge SLICE luck.

It came in the form of a 96th-minute equalizer for the Championship Chasers after referee Seb Stockbridge brought up seven minutes of stoppage time.

Sutton looked to have done the unthinkable – winning at Wembley in their first season in the Football League’s 124-year history – until Jordi Osei-Tutu scored with an effort that deflected U goalkeeper Dean Bouzanis to bring the score to 2-2.

It broke Sutton’s heart as Matt Gray’s League Two side dominated Rotherham, but in extra time they simply ran out of gas. 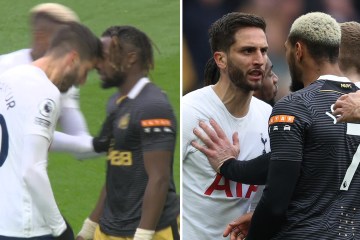 Chiedozie Ogbene thundered from 20 yards out and Michael Ihiekwe wrapped things up when he headed home from a corner in the second half of extra time.

Miller boss Paul Warne said he was already preparing for his post-match press conference when Osei-Tutu brought them back from death.

He said: “I was pretty calm. I was thinking about how I would talk to the press after the loss.

“In the first half we looked rusty and nervous and we performed better in the second half. But in extra time I felt we looked like we had healthier players on the pitch.

“Fair play at Sutton, they were better than us today, especially in the first half.”

Warne, who admitted he expected penalties rather than extra time, is now hoping his side will earn promotion to the Championship.

He added: “I will be devastated to return to Wembley this season. It would be amazing to win automatic promotion and hopefully the guys can take it from here.”

Sutton should have taken the lead in the 13th minute when Will Randall fired wide.

David Ajiboye had rocketed from inside his own half and beat four Rotherham defenders before passing the ball to Randall.

He clipped the ball but managed to put his effort away from the near post by Viktor Johansson.

But Randall managed to make up for his shocking failure when he scored Sutton’s opener in the 29th minute.

Ajiboye’s cross into the box was picked up by Michael Smith, but was too flippant and dispossessed by Randall, who set up Donovan Wilson.

He had time to control the ball with the sole of his shoe before calmly tossing it past Johansson.

Despite the gap in splits, Sutton looked comfortable as Rotherham fans grew concerned.

But they found their way back to this final when Ben Wiles fired three minutes before half-time.

A long field of kicks from Johansson was helped on its way by Smith and then Joshua Kayode before falling for Wiles.

He took a touch and looped it past Bouzanis from 20 yards out in what was a fine finish.

After the break, Wiles nearly added his second of the game but shot straight into Bouzanis’ arms as Sutton took full advantage.

Back at the other end and the impressive Ajiboye was center stage again.

His ball into the box found Craig Eastmond, whose first effort was blocked.

But the former Arsenal man was the quickest to react and pushed his second attempt past Johansson to restore Sutton’s lead.

Sutton looked safe and was having fun until SIXTH minute of stoppage time and just as the AP announcer confirmed Eastmond as man of the match.

A long punt field saw the ball fall on Osei-Tutu, who curled in with a fine finish that took a touch from Bouzanis on his way to the back of the net.

Sutton was finished and without Ben Goodliffe, who had limped off injured, they lacked the same composure at the back.

A good strike from Ogbene gave Rotherham the lead for the first time in extra time while Ihiekwe wrapped up the proceedings late on returning from a corner.

U boss Gray added: “I’m disgusted because we were this close to a great 90 minute performance and going up the stairs as winners.

“The extra time was a step too far for us. We played a lot of games and suffered injuries and some of the players who hadn’t played many minutes for us.

“It was a great week and I could tell the players were focused on getting the job done, which is why I’m so disgusted because we were so close.”