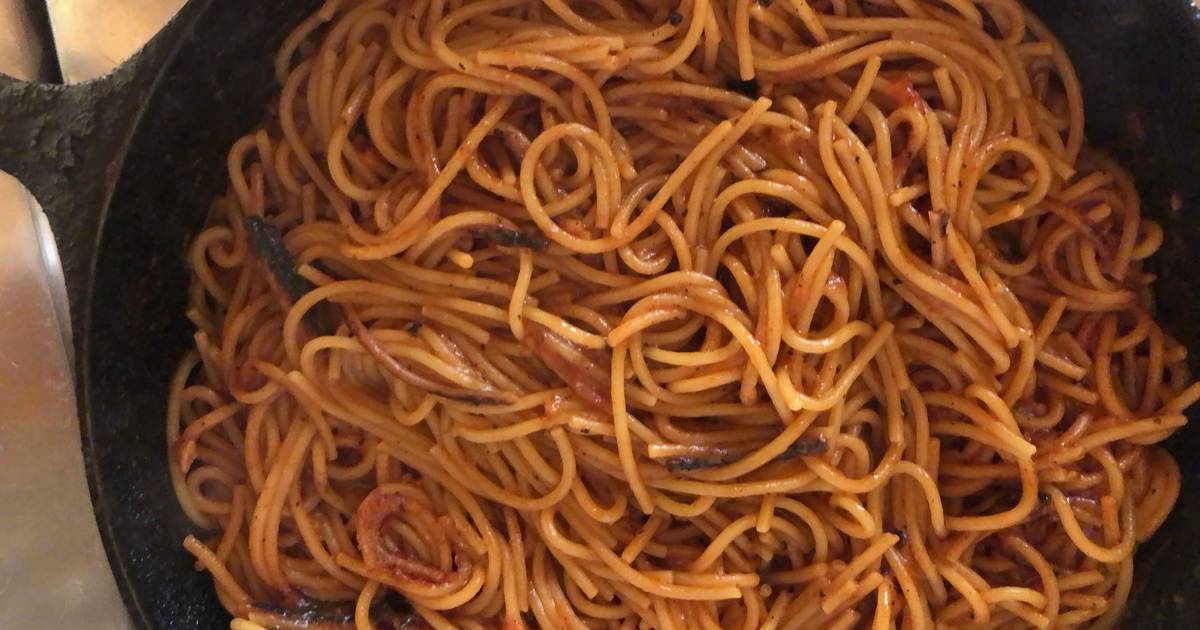 What We’re Cooking This Week: Kill Your Pasta

Pasta is easy to kill, whether by drowning it in sauce or cooking it to death. But spaghetti all’assassina requires a little effort. The southern Italian dish uses a technique called risottata to cook pasta like, well, risotto. It is often used with smaller, shaped pastas like pastini, but here a tomato flavored broth adds flavor to the spaghetti and helps with the charring required which gives this dish another name: spaghetti bruciati or spaghetti burned.

Most recipes tell you to use a pan large enough to lay the spaghetti flat, but even my arsenal of pans falls short when it comes to holding an 11-inch pound of noodles. So we’ll add another pasta-killing step that will infuriate traditionalists: break the spaghetti in half.

1 pound spaghetti, broken in half

Prepare the tomato broth by combining about half the tomatoes and the salt with 4-5 cups of boiling water in a small saucepan. You don’t need to maintain the heat after mixing, but keep the pan on the stove.

In a heavy skillet, preferably cast iron, combine about half of the olive oil, garlic and red pepper. Heat over medium-high heat until you start to smell the garlic (don’t let it brown, it will taste bitter). Add remaining tomatoes, spread in an even layer, then top with spaghetti in an even layer.

Maintain the heat on medium-high and let the spaghetti rest undisturbed for several minutes so that it develops a crust that is burnt in spots. Pour about a cup of tomato broth over the spaghetti, but don’t stir. Let the water boil until it is almost used up (listen for the sound to change from bubbling to sizzling). Add about another cup and use a fork to check if the pasta has softened enough to gently flip it. The bottom will have sections that look burnt and the pasta will clump together. Use a fork to break up the clumps, but don’t worry too much about it.

Continue adding the tomato broth one cup at a time, stirring and turning the spaghetti with each addition. As the pasta softens, it will be easier to stir. When the last tomato broth has been added and cooked, taste the spaghetti. It may take a little more cooking, and some will be more cooked than others. Add hot water a half cup at a time and continue cooking until the pasta reaches your preferred level of al dente. Add the rest of the olive oil and cook for another minute or so. Taste and add salt if needed, serve with grated parmesan if desired.