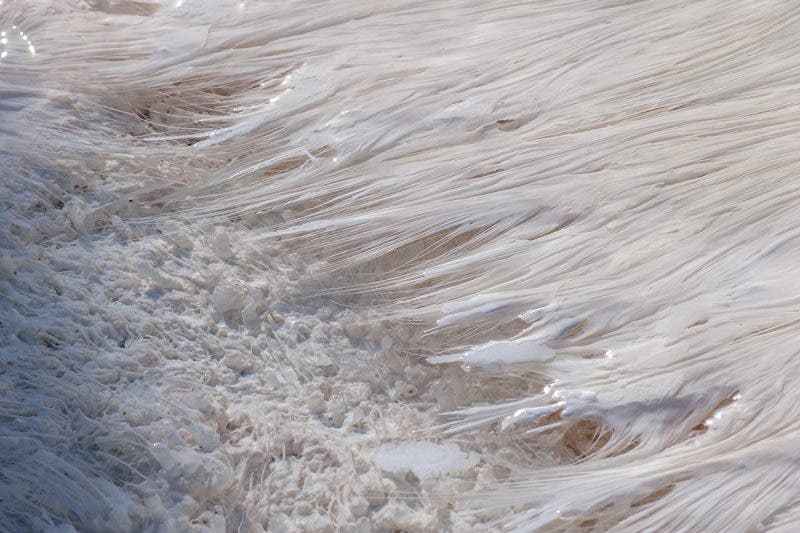 Why Aliens Look More Like Pasta Than ‘Little Green Men’

It would be fantastic to visit another planet and be greeted by friendly little green aliens. It really would be, but that’s just the projection of popular culture. Alas, when we finally find the first extraterrestrial lifeforms – if such a milestone ever occurs – in all likelihood, they will be microbes. Not just any annoying amoeba-shaped microbes. Alien microbes or their fossils could look like fettuccini or capellini, according to scientists at the University of Illinois at Urbana-Champaign.

This is how some hot spring-loving microbes are shaped here on Earth, and if you’ve ever visited Yellowstone National Park, you may have seen signs of it. The country’s largest national park is dotted with geothermal hot water from the ground, which is rich in minerals. These minerals precipitate, forming fibrous structures of calcium carbonate called travertine.

When Bruce Fouke, a geobiologist at the University of Illinois at Urbana-Champaign, visited Mammoth Hot Springs in the park, he discovered that the travertine looked like, well, pasta. Focusing on the head of the mineral spring, where the water is particularly warm (65 to 72 degrees Celsius) and more acidic, Fouke’s team sampled mats of filamentous microbes. These pasta strands owe their shape to the rushing nature of the hot spring, which forces organisms to cling to each other to survive, whereas in calmer waters microbes take up residence in mats. viscous unconsolidated. Each thread is made up of trillions of microbes, which thrive where 99.99% of all other life forms would have perished.

After taking a sample to the lab, the researchers discovered that pasta mats are formed by Sulfurihydrogenibium yellowstoneense, or “sulfuri” for short. True to their name, these bacteria break down sulfur compounds, producing hydrogen sulfide gas in the process and energy for themselves to survive. Proteins on the surface of these microbes react with mineral-rich waters, promoting the growth of calcium carbonate crystals and accelerating the formation of travertine a billion times faster than in other environments. Where there is paste-like travertine, you will find sulfuri, and vice versa.

“They form tightly coiled cables that wave like a flag attached to one end. These Sulfuri cables are surprisingly similar to fettuccine pasta, while further downstream they are more like capellini pasta,” Fouke said.

Sulfuri represents one of the oldest types of life on Earth, having evolved over 2.5 billion years ago when Earth was a hellish planet with very little oxygen in its atmosphere. And while any extraterrestrial microbes living in hot springs are undoubtedly a different species, they would likely look and behave much like Earth sulfides given the limited number of ways carbon-based life can operate in such extreme environments.

If a rover encountered paste-like travertine on another planet like Mars, these rock formations could be treated as fossils. The unique morphology of travertine would also make it quite easy to spot.

“It should be an easy-to-detect fossilized life form for a rover on other planets,” Fouke added.

“If we see the deposit of this type of filamentous rock extensive on other planets, we would know that it is a fingerprint of life. It is large and it is unique. No other stone is like this- This would be definitive proof of the presence of extraterrestrial microbes,” added the scientist.

So far, we haven’t found any filamentous travertine on Mars, but the now-defunct Spirit rover has found some strange cs.auliflower-shaped silica formations in Gustav Crater, an area believed to have once housed ancient Martian hot springs. These rocks resemble those shaped by microbes on Earth, in fact at Yellowstone National Park where the silica contains the fossilized remains of microorganisms. Unfortunately, Spirit became inoperative before they had a chance to investigate further. Elsewhere in Gale Crater, the Curiosity rover found sedimentary rocks which appear to show signs of possible microbial mats. However, Curiosity does not have the necessary hardware to perform a proper analysis.

Perhaps the new Perseverance rover, which arrived on Mars in 2021 at Jezero Crater, will have better luck. Let’s hope he gets a nice fettuccine pasta dish from a Martian chef.

The results were reported in the journal Astrobiology.