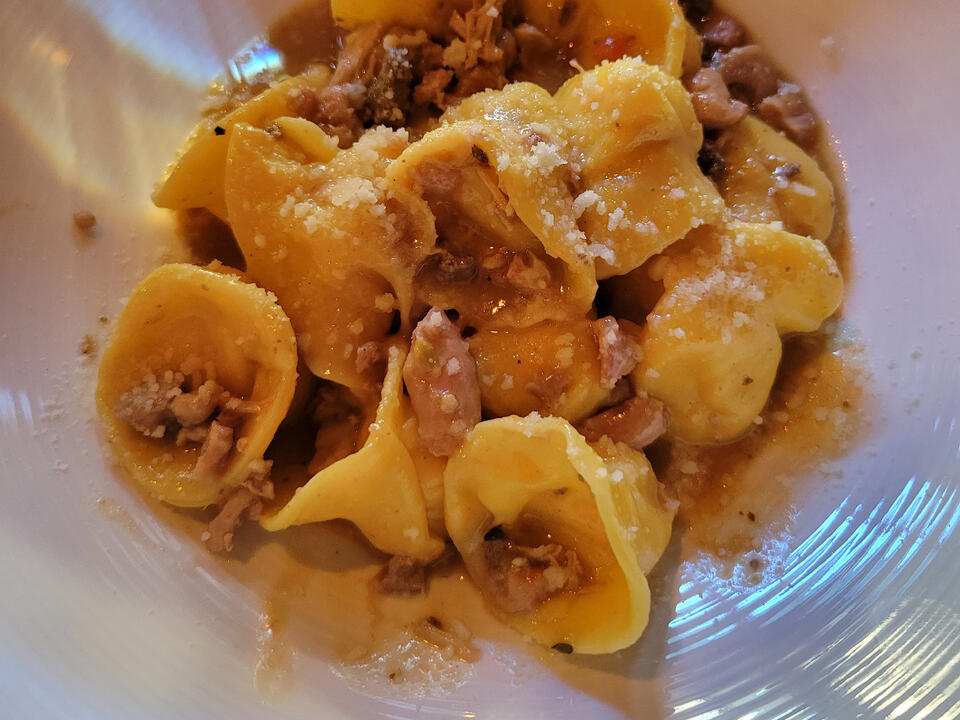 I should have known right away that this was going to be special.

Although we are pasta lovers, we had never been to Belotti – a previous attempt had been bungled by a visit from the granddaughter – but I finally managed to get a reservation for the weekend. As we approached where I thought the restaurant was, I saw an empty parking space and, despite the impatient presence of a bus behind us, I managed to park parallel to the first kick.

When we got out of the car, Belotti was two doors away, a piece of parking karma that proved predictive.

Belotti is a small storefront on College Avenue in the Rockridge neighborhood of Oakland, but its reputation has spread throughout the Bay Area for its superb pasta. And while I was willing to believe, I also wondered how much better Belotti’s pasta could be than the many pasta restaurants we’ve eaten at over the years.

The answer? Much better. So much better than I can really describe. But since I have 600 words to fill in here, I’ll give it a try.

I ordered Casoncelli Bergamaschi, which chef Michele Belotti describes on the menu as “my mother’s Bergama stuffed pasta”. It’s a bit confusing, because Bergama is a city in Turkey (the ancient Pergamon), not somewhere you think of when looking for pasta. But the shape, apparently, is unique, rectangular, with a central stuffing of beef, prosciutto and pork shoulder.

Shape, shmap. It was so good. So good. The pasta itself was perfect and the lightly spiced stuffing mixed beautifully with the pasta and the olive oil, spices and bits of prosciutto that lightly coated the bottom of the bowl.

When I really like pasta, I usually can’t help it. I just put it on my fork as fast as I could and blew through that plate in no time. But with Casconcelli Bergamaschi, each bite – about half a stuffed piece – was so good, so tasty, that I only had to savor it for a while. And then a sip of good red wine at a reasonable price. And another half piece.

My wife went with the Tortellini di Polenta Tino e Coniglio, which was another stuffed pasta, this time filled with polenta, rabbit sugo and thyme. She was reluctant to trade bite for bite, but unusually, we both agreed that we liked each other’s pasta too. But no more trading took place, just sipping wine (she loved her selection of white wines) and the occasional murmur of satisfaction.

Unlike every other pasta restaurant I’ve been to, the menu didn’t include a Caesar salad. But the salads we ordered were excellent and the dessert was also very good.

But Belotti is all about pasta, and if you think its reputation, or this article, is just hype and is jumping on the latest bandwagon, then make a reservation and find out for yourself. .

But don’t expect to have that parking space.

As I mentioned, we love pasta and have been to several places. It’s hard to get it wrong, of course, but here, in alphabetical order, are three we like:

Donat & Co.: Near the intersection of Ashby and College in Berkeley, Donato & Co. excels at the basics. (Insider tip: While carbonara isn’t usually on the menu, it’s always available.)

Gianni’s Italian bistro: The place lacks atmosphere – there is a second-hand parking lot, a paint shop and a tire shop nearby – but Gianni’s in San Ramon rises above its surroundings with a focus on very good pasta plates.