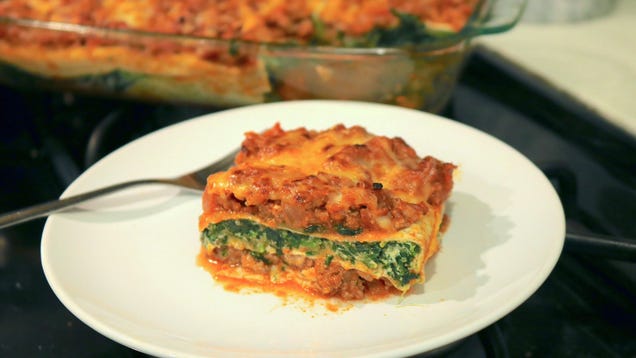 You don’t need pasta for this high-protein lasagna

Lasagna is already delicious, but maybe you’re looking to add more protein and cut back on some carbs, maybe digestive sensitivities prevent you from enjoying pasta the way you want, or maybe the grocery store is sold out again. Either way, you’re craving lasagna, so instead of foregoing the dish altogether, make this protein-rich lasagna layered casserole with egg white “pasta” sheets that’s so delicious that it might make you not so accidentally forget to buy regular lasagna sheets next time.

I love lasagna as much as the next orange, cartoon cat, but this dish really made me doubt my resistance to alternative noodles. The egg whites created unmistakable layers, the meat sauce and ricotta mixture took center stage, and it sliced ​​beautifully. The leftovers the next day were just as delicious, I even ate the first bites cold because it smelled so good I couldn’t wait the 90 seconds for the microwave to do its job.

The beauty of using egg whites in place of pasta sheets is that it’s relatively neutral in flavor, a thin layer cooks quickly, and the cooked egg whites are solid enough to create and maintain discernable layers in your pan. (Eggs also do excellent protein wraps.) I included some greens by adding a healthy dose of chopped spinach to the mix. To simplify this dish, buy a carton of egg whites instead of breaking and separating whole eggs. Most grocery stores sell them right next to their whole eggs. Shake it well and keep going. If you’re using egg whites that you’ve separated, give them a vigorous whisk before making the sheets. They will spread more thinly and evenly this way.

As you would with any other type of lasagna, prepare all the components first. This will involve making your meat sauce, seasoning your ricotta mixture, and grating the cheeses. Make the egg white leaves by lightly oiling a wide-bottomed frying pan. You can also use a wok, like me. Simply tilt the pan to create a wider circle. Pour about a tablespoon of olive oil into a small bowl and use a pastry brush to brush the oil between the sheets of eggs to cook. Heat the skillet over medium heat. Pour about ⅓ cup of egg whites into the skillet. As it cooks, tilt the pan to ensure even coverage and get the size you need, about eight inches in diameter for an 8 x 11 inch pan. The sheet of egg white will cook in about two minutes. It is not necessary to cook the other side. Gently lift the egg white from the pan and place it on a lightly oiled plate. Place a small piece of parchment on it so the next one you pile on it is less likely to stick. Do this four more times, stacking the finished circles on the same side, with a piece of parchment between them.

I used an 8 x 11 inch Pyrex dish and started with a super thin swipe of my sauce mixture on the bottom. Spread a sheet and a half of eggs, breaking any excess and mixing to cover the bottom. Spread half of the meat sauce and cover with another layer of egg white. Spread the spinach and cheese mixture, and cover with the last leaf and the last pieces of egg white. Use the rest of the meat sauce to cover the top and sprinkle with grated cheeses. If layers of eggs are visible, place them to the side of the dish to make sure the meat sauce covers it. This ensures that the egg whites do not overcook and become rubbery. The components are already cooked, so the cooking time is short. It’s really just for setting layers and melting cheeses. Bake at 350°F for 10-15 minutes or until you can see the edges bubbling quickly. Turn the oven on to broil for another five minutes or so, just to toast the top layer.

Let this protein-rich ‘zagna (say it by your nose) cool for 5-10 minutes before slicing. This casserole makes about six servings and can be stored, covered, in the refrigerator for up to five days.

Preheat the oven to 350°F. Lightly brush a dish with oil. Prepare a small to medium saucepan.

Add a little oil to a medium skillet and sweat the garlic and onion over medium heat, until translucent but not brown. Add ground beef and ground turkey. Break up meats while cooking. Lightly salt the mixture in the skillet. Once the meats are cooked through and most of the water has evaporated, stir in the bolognese sauce. Turn off the heat and set aside.

In a small bowl, mix well the ricotta with the garlic powder, chopped spinach and salt to taste. Put aside.

In a wide-bottomed skillet or wok, lightly brush the bottom and sides with oil. Fry five thin circles of egg white in the pan over medium heat, brushing the pan with oil between each frying. Each layer of egg white is ⅓ cup. So use a measuring cup to make portioning easier. Stack the egg circles on the oil-covered dish, with a small piece of parchment between each layer. You are ready to assemble!

Pour a few tablespoons of meat sauce into the bottom of the casserole dish and spread it out to cover the bottom with some moisture. This is just a buffer to prevent the bottom layer from burning. Add one and a half full sheets of egg white to the bottom, reserving the other half to fill in any missing spaces as you go. Cover with half of the sauce mixture. Spread another layer of egg white and cover it with whole spinach mixture. Spread the last layer of egg white on top, using the excess to repair missing areas, and cover with the other half of the meat sauce. Cover the surface with the grated Raclette and Parmesan cheeses.

Bake at 350°F for 10-15 minutes, or until you see the edges bubbling quickly. Broil another five minutes to toast the surface. Leave to cool for 10 minutes and enjoy. This recipe makes six servings.